Agoda.com, Asia's global hotel booking site and part of Priceline.com (NASDAQ: PCLN), is helping make the BBC Proms 2010 an even more memorable event with a range of fantastic hotel rates across London. 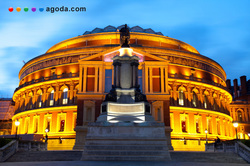 "Proms Intro" sessions held to help people of all ages develop their appreciation of classical music.

Agoda.com, Asia's global hotel booking site and part of Priceline.com (NASDAQ: PCLN), is helping make the BBC Proms 2010 an even more memorable event with a range of fantastic hotel rates across London.

The Proms is the world's largest classical music festival with events taking place at Royal Albert Hall over several weeks. This year it runs from July 16 to September 11.

"'Proms" is short for "promenade concert", where audience members, rather than being seated, stand or walk around the auditorium while a performance is in session.

The Proms began in 1895 as a way of introducing classical music to a wider audience. The low ticket prices and casual atmosphere of the events attracting people who were previously more likely to shy away from a classical concert.

The original spirit of the Proms lives on in full force today. Ticket prices are still low (from GBP5 per concert) and people can literally wander in off the street without a reservation to experience great classical masterpieces performed by one of the world's leading orchestras.

People who attend the Proms are called "Prommers"; Prommers can wander around Royal Albert Hall auditorium during performances. The Arena directly in front of the orchestra is said to have the best sound, whereas the Gallery high above the stage offers the best view. There is no dress code and children over the age of five are encouraged to attend, with music workshops and "Proms Intro" sessions held to help people of all ages develop their appreciation of classical music.

The BBC Proms 2010 includes performances by Placido Domingo, Jos arreras and the London Philharmonic Choir, plus symphonies by Beethoven, Chopin and Bach. Contemporary composers are also featured, as are literary events, children's Proms and a themed Doctor Who Prom featuring music from the TV series. The festival comprises 76 Proms concerts and 13 chamber music recitals, culminating in The Last Night, the Proms' biggest event, held at Royal Albert Hall and broadcast around the world.

Just as the Proms seeks to bring classical music to a wider audience, Agoda strives to make access to the event easier and more affordable by securing discounted hotel room rates across London. The following special deals include some of the best hotels in London, covering every price range. For more information about the Proms 2010 visit http://www.bbc.co.uk/proms/2010.

Euston Square Hotel - 3 stars
Book a Double Room for at least 2 nights and enjoy a 5% discount. Agoda rates from USD 128 per night.

Agoda Company Pte Ltd (http://www.agoda.com) is a leading, Asia-based, online hotel reservations company, which specializes in securing the lowest discount hotel prices. Agoda.com is part of Priceline.com (Nasdaq:PCLN). Agoda's network includes over 7,000 hotels in Asia-Pacific and more than 100,000 worldwide. The multinational staff of 350 professionals, located throughout Asia, provides a first-rate reservation service that uniquely combines local knowledge and local connections to provide the best hotel deals to both business and leisure travelers.

In addition, Agoda customers participate in the Agoda Rewards Program, earning further discounts and free stays. Unlike programs that limit travelers to a single chain, the Agoda Rewards Program allows customers to redeem Rewards Points at thousands of hotels around the globe, at any time. A member of the Pacific Asia Travel Association (PATA), Agoda's aim is to promote travel by making it more affordable and more accessible to more people.