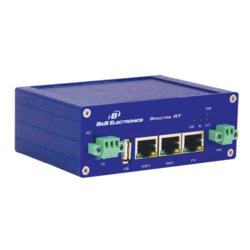 B&B Electronics Manufacturing Co., Inc., a leading developer of rugged wireless and wired M2M connectivity solutions for harsh environments, today announced its SPECTRE RT 300 series industrial wired Ethernet routers, which are designed to securely connect Ethernet and serial equipment in tough environments where office/home-grade routers can’t handle the job. Much like the Linksys router in homes, the rugged SPECTRE RT router can connect a private network to a public one, allowing devices to communicate across the Internet. But unlike such routers, the compact 1.7 x 3.1 x 4.5 inch SPECTRE RT was designed for harsh environments, such as cramped cabinet spaces and the outdoors, and features a wide (-40 to 75°C) operating temperature, a compact DIN-rail mount, a rugged metal case, the ability to use 10 to 30VDC power input, and I/O that can be used to monitor door closures or set alarms.

The ERT310 model supports Ethernet ($499 MSRP) and the ERT312 supports both Ethernet and serial (RS-232) connectivity ($549 MSRP). Both carry a 5-year warranty, and are available from B&B Electronics and all its North American distribution partners: http://www.bb-elec.com/How-to-Buy/Find-a-Distributor.aspx.