Helping to protect and enhance the BlackBerry Z10, UK online retailer Mobile Fun have sourced a range of Genuine BlackBerry accessories for the new smartphone. 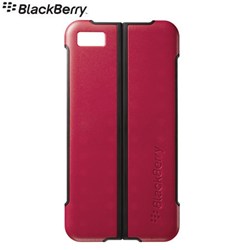 The Transform Shell not only protects the BlackBerry Z10 but also doubles up as a stand.

One of the BlackBerry Z10 covers to arrive in stock is the Genuine BlackBerry Z10 Transform Shell, which is available in red, black or white. The Transform Shell is designed to protect the Z10 from daily damage caused by bumps, drops and scratches, so that it remains looking newer for longer. The case also ensures that the slim design of the Z10 stays intact by not adding a lot of bulk.

A great feature of the Transform Shell is that the case has a folding hinge which allows part of the case to be folded out and used as a stand for the Z10. This is great for docking the Z10 at the perfect angle for typing, swiping and streaming media with the Z10.

The Transform Shell also comes complete with a BlackBerry Z10 screen protector, therefore the display of the Z10 is protected as well as the body of the phone.

As expected the Transform Shell contains cut-outs for all the ports and features of the Z10 including a cut-out for the BlackBerry Z10 charger, camera and headphone jack. This means that the phone doesn't need to be removed from the case in order to be charged.

Mobile Fun has offices in the UK, USA, Germany, Spain and France and delivers products to over 50 countries worldwide

Mobile Fun were recently named the 'Best Accessory Retailer' 2012 at the What Mobile Awards and won the title of Online Retailer of the Year' at the Mobile News Awards 2012 for the second year running.