Contest Now Open To All U.S. Residents For Beamz Players To Compete For $5,000 Grand Prize 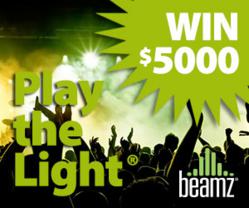 It’s a fun product for people of all ages to showcase their creativity in making music by playing light.

Beamz Interactive Inc. (OTCBB: BZIC), an interactive music and gaming technology company, today announced that its Beamz Player Performance contest has been expanded and will now be accepting entries from U.S. residents of all ages.

The contest began accepting entries on September 10, 2012 and the company thereafter decided not to restrict the participation age for contestant entry. Contestants will compete by playing a Beamz song from a list of designated songs and providing a video of their performance. The grand prize will be $5,000 in cash along with various recognitions by Beamz Interactive and a panel of artist judges, including David Ellefson of Megadeth, solo guitar artist Craig Chaquico, solo saxophonist Euge Groove and the Beamz inventor Jerry Riopelle. The second place prize is $1,000 and the third place prize is $500, and the top 10 finalists will receive signed albums and/or other items from the artist judges, along with headphones from Wicked Audio.

“We’re pleased to expand the contest to accept entries from contestants of all ages,” said Al Ingallinera Jr., Vice President of Product Management for Beamz Interactive. “It’s a fun product for people of all ages to showcase their creativity in making music by playing light.”

For contestants that would like feedback on their video performance before submitting into the contest, Roy “FutureMan” Wooten is now available to provide feedback and encouragement to potential contestants that submit their video performance for review. Roy Wooten, also known as "RoyEl", best known as Future Man, is an inventor, musician and composer. Roy is a percussionist and member of the jazz quartet Béla Fleck and the Flecktones, along with banjoist Béla Fleck, harmonicist Howard Levy, and Roy's brother, electric bass virtuoso Victor Wooten.

The Beamz is an interactive music product that enables anyone to make great sounding music by touching laser beams and “playing light” using pre-programmed interactive Beamz songs. The Beamz music library encompasses songs from all music genres, including pop, rock, jazz, blues, classical, dance, hip-hop and dubstep; and throughout the Beamz music library users may experience interacting with hundreds of different instruments, music clips and sound effects. The designated songs for the Beamz Player Performance contest will include a wide selection for participants to choose from so that no one’s music interest is left behind. Contestant entries may also include performances using the Beamz interactive laser controller with traditional music instruments and/or using multiple Beamz laser controllers for group play performances.

The contest is now open for legal U.S. residents and will continue to accept entries through November 10, 2012. The top 10 finalists will then be announced on the Beamz web site on November 23, 2012 and thereafter voting will be opened to the general public for online voting between November 24, 2012 and December 10, 2012. The winners of the contest will be announced on December 15, 2012. The company will also be offering special promotions and discounts to the contestants throughout the contest period. Details about the Beamz Player Performance contest, including Official Rules and the Contestant/Participant Agreement are available online at http://www.thebeamz.com/player-5k-contest.

About Beamz:
Based in Scottsdale, AZ, Beamz Interactive, Inc. (http://www.thebeamz.com) has created a new interactive laser controller technology that can be used to develop new market opportunities in a wide variety of music, game, therapy and consumer applications. In its first application, the Company developed an innovative new music technology and product offering that brings music to literally everyone in a manner that has previously not been possible. Beamz allows people that have no musical background or training to play and enjoy music within minutes, yet it has the depth to enable accomplished DJs, artists and musicians to perform, compose and create very sophisticated interactive music. Beamz Interactive’s technology portfolio includes multiple patents, patents pending and trade secrets covering interactive music, software, laser-based controllers, gaming applications and related designs and devices.

Cautionary Note Regarding Forward-Looking Statements:
This press release contains, and our officers and representatives may from time to time make, “forward-looking statements” within the meaning of the safe harbor provisions of the U.S. Private Securities Litigation Reform Act of 1995. Forward-looking statements can be identified by words such as: “ anticipate,” “intend,” “plan,” “goal,” “seek,” “believe,” “project,” “estimate,” “expect,” “strategy,” “future,” “likely,” “may,” “should,” “will,” and similar references to future periods. Examples of forward-looking statements include, among others, statements we make regarding: expected operating results, such as revenue growth and earnings; anticipated levels of capital expenditures; strategy for customer retention, growth, product development, market position, financial results and reserves; and strategy for risk management.