Non-Toxic Bed Bug Spray Offered to Woman Left Homeless Due to Bed Bug Infestation, My Cleaning Products Relates How Other Victims Could Get Samples of the Solution

My Cleaning Products related that a woman in Hot Spings Arkansas was forced to move out of her house due to bed bugs. The company, to help, offered the woman and all the other bed bug victims samples of it pesticide-exempt bed bug spray called Bed Bug Bully. 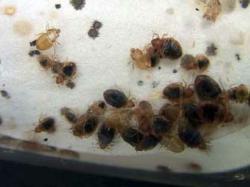 To get rid of bed bugs as soon as they are detected, a bed bug spray must be prepared...

Bed bugs, even with their size, could overthrow a house and kick its victims out. Based on a report from arkansasmatters.com, a woman named Jennifer Golden from Hot Springs, Arkansas, experienced just that. Wanting to help her and all the other bed bug victims, My Cleaning Products suggested to them the use of the pesticide-exempt bed bug spray called Bed Bug Bully. It also offered them complimentary samples of the product so they could test it themselves.

According to the company, the report shared that Golden was bitten by bed bugs around her arms. And as she said so herself, all of her things were contaminated by the pests.

Because of the said massive bed bug presence, the company's site related that she was forced to move out of her home but was only allowed to take with her a number of things. It detailed that those items that could fit in her bag and could be dried for 20-30 minutes were the only ones that she was permitted to bring.

Golden's landlord, shared MCP and stated by report, reimbursed her deposit and rent. And as part of it, her temporary stay in a hotel was paid-for. However, it added that would only be until Monday. After it, Golden would homeless, it stated.

Here is a part of the report.

“Bed bugs are very small. But despite their tiny size, they could still kick you out of your house. And that's what exactly happened to Jennifer Golden of Hot Springs, Arkansas.

Said the report from arkansasmatters.com, with her arms full of bed bug bites, Jennifer was forced to leave his home due to a massive bed bug infestation. And that's not all. She was also limited to bring just a number of things. Anything that couldn't fit in her bag and couldn't be dried by a blow dryer in 20-30 minutes, couldn't come with her.”

Bed bugs are small and they don't transfer diseases, said My Cleaning Products. But with the marks they leave and the swelling and itching that they cause, they could be very annoying and could cause embarrassments, it added. Apart from that, with the rate they multiply they could force anyone out of her house in no time. And so, it said that a prompt bed bug treatment must be implemented..

To get rid of bed bugs as soon as they are detected, a bed bug spray must be prepared, My Cleaning Products asserted. It shared that the solution offers a prompt and convenient bed bug treatment. However, among the many sprays, the company only recommended Bed Bug Bully. It said that it is effective and safe as proven by the pest-control companies and as approved by FIFRA 25(b).

In addition to just recommending Bed Bug Bully, the company also urged the public to try the product for themselves. It said that its complimentary samples are available at MyCleaningProdcuts.com.