One report from usforacle said that because of bed bugs, a number of USF students were forced to relocate for a number of days. Knowing how effective and safe Bed Bug Bully is, My Cleaning Products asserted that it's the answer to the said bed bug problem. 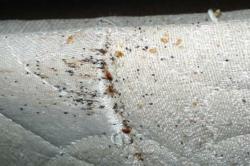 ...for a truly convenient, effective and safe bed bug treatment, the company said that Bed Bug Bully is the help to get.

Bed bugs were suspected present in another campus. Based on a report from usforacle.com published on March 25, a number of students were even asked to relocate because of their possible presence. And knowing how annoying the blood-fed pests are and how difficult it is to eliminate them, My Cleaning Products advised the use a pesticide-exempt bed bug spray. In addition, it offered samples of it to the public, so they could prove it themselves that it is the best bed bug help anyone could get.

According to the report, the University of South Florida was the school recently suspected to be bed-bug-infested, related My Cleaning Products. And particularly, it shared that the room of Marly Difruscio in Mu Hall was the possible exact location of the pests. However, it was only after her second request for inspection that the likely bed bug presence was detected, it added.

For the inspection and bed bug treatment to take place though, MCP detailed based on the report, that Difruscio and her roommates were relocated for four to five days to another housing. However, before moving in, it shared that they were first required to dry all their clothes and to changer what they were to avoid possible bed bug transfer.

Difruscio, as she said so herself on the same report, revealed that she was bitten by the possible bed bugs several times already while sleeping, MCP shared. That, it added, left her with marks similar to the mosquito bites.

Here's a part of the post Possible Bed Bug Presence Discovered in the USF by My Cleaning Producs.

“Bed bugs are not yet done making rounds in schools. A recent report has it that another campus purportedly fell victim to the said blood-fed pests. And because of their suspected presence, four students were forced to relocate.

According to the report, this time, bed bugs were possibly present in the University of South Florida. Particularly, the area suspected infested by them was the student housing Mu Hall.”

My Cleaning Products said that bed bug bites resembles that of other insects. And so, it stated that Difruscio's bite mark could well be that of bed bugs.

With signs like it, MCP advised that a prompt inspection must then be implemented. And if the pests' presence is confirmed, it added that one must then follow it up with an immediate pest-control process.

However, for a truly convenient, effective and safe bed bug treatment, the company said that Bed Bug Bully is the help to get. As it explained, it is effective as proven by pest-control companies and pesticide-exempt as approved by FIFRA 25(b). With that effectiveness and safety that it offers, the company asserted that it surely is the best bed bug spray to get.

To prove that true, MCP urged the public to try it.

As it shared, anyone could get a Bed Bug Bully Complimentary Sample at MyCleaningProducts.com.