Budweiser Brings Relevancy to BeerTAG and the Beer Identification Market, with “My Bud Light” Bottle Packaging 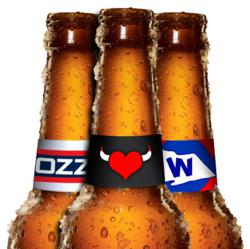 Chicago sports-themed BeerTAGs will soon hit the market this spring.

It’s a game changer, and it completely validates our purpose in the marketplace. We fully expect sales for Bud Light to increase during this promotion, and we can accomplish similar results for our advertisers with the BeerTAG.

Bud Light, the world’s best-selling beer, is introducing beer identification to the mainstream with a new packaging innovation named, “My Bud Light.” The promotion comes at an opportune time for BEERTAG, LLC, as the young company is gearing up for a big summer with the planned launch of their newest Chicago sports-themed editions of BeerTAGs.

The BeerTAG is an exciting new patent pending product, which fits over the bottleneck to help solve the common problem of, “Which beer is mine?” Following BeerTAG’s footprint, the new innovation from Budweiser further confirms the consumer demand for a great beer identification solution.

As featured on recent national television spots during the 2011 NCAA Men's Final Four Basketball Tournament, the new My Bud Light packaging allows consumers to mark their beer, by using a key or coin to write and draw on the label.

“It’s a cool concept and a great sign for us from a competitive standpoint,” said Matthew Lee Rosen, founder of BEERTAG, LLC. “We’ve been promoting awareness of the issue and growing a demand for our solution with over 3,000 fans on facebook. Now, Budweiser is putting a huge spotlight on this opportunity for us.”

BEERTAG, LLC has been aggressively pursuing deals with advertisers in the beer industry, while testing their product at select bars in the Chicago and Tampa areas.

“Over the last 12 months, we’ve been in contact with many of the top beer companies in the U.S., so it’s not surprising at all to see Bud Light create a solution of their own,” said Joe Adkins, director of sales and marketing. “It’s a game changer, and it completely validates our purpose in the marketplace. We fully expect sales for Bud Light to increase during this promotion, and we can accomplish similar results for our advertisers with the BeerTAG.”

Confusing one's beverage may not only be an embarrassing experience, but it can also expose a person to obvious health risks. According to a study conducted in April of 2010, by BEERTAG, LLC and Los Angeles-based United Sample Inc., 32% of all beer drinkers in the United States either peel or tear the label off their beer, just so they know it's theirs. An additional 46% place their drink down in a specific spot, so nobody else drinks it by accident.

Created in a variety of colors and designs, the BeerTAG provides a simple solution for consumers, while creating a new and unique opportunity for advertisers. Specifically, the BeerTAG allows beer advertisers a one-of-a-kind opportunity to promote their brands, directly onto a competitor's product, in the on-premise environment.

BEERTAG, LLC is a Chicago-based company, incorporated in January of 2010. The company’s goal is to make its flagship product, the BeerTAG, available as a free promotional product to consumers in over 10,000 bars in the U.S. within the next three years.