The Mill Press Releases Book on the Life and Works of Jewish Jamaican Artist Isaac Belisario -- Now Available at Amazon.com

BELISARIO: Sketches of Character, a historical biography of the Jewish Jamaican artist Isaac Mendes Belisario, has been published by The Mill Press and is now available at Amazon.com. Belisario's paintings and lithographs are included in stunning detail in this museum-quality book by author Jackie Ranston. 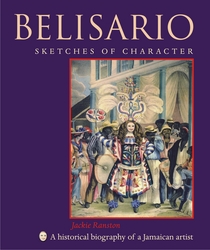 Belisario: Sketches of Character, published by The Mill Press, Jamaica

The Mill Press, a publishing house concentrating in Jamaican heritage, art and culture, is officially launching BELISARIO: Sketches of Character, a historical biography of the Jewish Jamaican artist, Isaac Mendes Belisario, in New York on November 19, 2008. The book, researched and written by Jackie Ranston, was twenty years in the making and acts as a narrative, a biography, a reference book, and a fine art book in one.

BELISARIO: Sketches of Character promises to become an icon in the annals of Jamaican and Judaist histories. With Belisario's paintings and lithographs included in stunning detail, readers witness art of rare distinction, depicting the less celebrated inhabitants of Jamaica and the turbulent times in which Belisario lived and worked.

Based on previously unpublished records, BELISARIO: Sketches of Character reveals new insights on Isaac Mendes Belisario's life and works. Beginning with the histories of the Sephardic Jewish families from whom Isaac Mendes Belisario (1794-1849) is descended, the book traces the story of Belisario and his ancestors through the Spanish Inquisition, their migration to London and Jamaica, and the fight against slavery, until Belisario produces his pivotal work: Sketches of Character, a series of lithographs depicting the brilliant Christmas masquerades known in Jamaica as 'Jonkonnu' (John Canoe).

About the Author
Jackie Ranston is a researcher and writer specializing in Jamaican family histories. Her published works include The Lindo Legacy, They Call Me Teacher, From We Were Boys and First Time Up, all studies of important personages in Jamaican history. Born in London, England, Ranston has resided in Jamaica since 1970 after her marriage to a Jamaican graphic designer and book illustrator. She has worked as an account executive for a major Jamaican public relations firm; was a government chief public relations officer and a consultant editor to The Gleaner, Jamaica's oldest existing newspaper which first appeared in 1834. Together with her husband and grown children Ranston runs a publishing company focusing on Early Childhood Education and Jamaica's cultural heritage.