Twelve Susan Mallery romance and women’s fiction novels appear on Publishers Weekly’s list of The Bestselling E-books of 2012. According to the list, Mallery sold a combined total of more than 620,000 e-books last year. 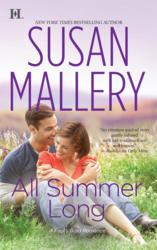 On March 17, Publishers Weekly released a report titled “The Bestselling E-books of 2012,” which includes twelve books by Seattle author Susan Mallery. According to the list, Mallery sold a combined total of more than 620,000 e-books last year.

“Romance readers were early adopters of e-reader technology,” Mallery says. “Their reading habits are voracious. Some readers devour a book or two every day, so you can imagine how quickly a bookshelf fills up… then overflows to counters, tables, under the bed. Space is one of the primary reasons cited by my readers when asked why they purchased an e-reader. Or why their long-suffering husbands purchased an e-reader for them. It doesn’t always work the way the husbands thought it would; many readers also buy a paperback copy of the books they love best. I still sell more print books than e-books, but that ratio is changing.”

Ten of the twelve e-book titles are from Mallery’s Fool’s Gold series, her most popular ongoing series of romance novels. Three of the titles – Almost Summer, Only Us: A Fool’s Gold Holiday, and Sister of the Bride – were released exclusively in ebook format. The others are also available in paperback or hardcover. The Susan Mallery titles included in the list are, in order of sales:

Mallery has seven previously unpublished 2013 e-books, including Three Sisters (available now), plus six new Fool’s Gold titles: Halfway There (May 1), Just One Kiss (May 28), Two of a Kind (June 25), Three Little Words (July 31), Susan Mallery’s Fool’s Gold Cookbook with short story (August 27), and Christmas on Fourth Street (September 25). With the exception of Halfway There, each of the books will also be available in print. Halfway There is an e-book exclusive.