Three Sisters by Susan Mallery, named a Top 13 New Book of 2013 by Rhapsody Book Club, has hit both the New York Times and the USA Today bestsellers lists in its first week of release. The book is about three women whose friendship transforms their lives. 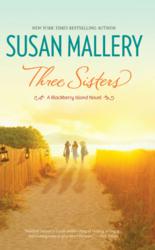 My readers know they can count on me for a happy ending.

Three Sisters, selected earlier this year by Rhapsody Book Club as a Top New Book of 2013, is about the friendship that transforms the lives of three women who live in neighboring homes on fictional Blackberry Island, Washington near Seattle. In three intertwining storylines, Andi, Deanna, and Boston fight toward happiness through heartbreak, marital problems, grief, even being jilted at the altar. Brought together by geography, the women discover in each other kindred spirits, and their friendship gives each the strength to triumph over pain.

“My readers know they can count on me for a happy ending,” Mallery says. “That’s a promise I make to them, and I think it’s why so many of them rushed out to buy Three Sisters as soon as it was released. They know they can relax into the experience of the story, because when they finish my books, they’ll feel good about the world.”

A readers’ discussion guide has been included in Three Sisters to facilitate book club conversations. For ebook readers, Mallery has provided a printable version of this discussion guide on her Blackberry Island website, http://www.blackberryisland.com. Also on the website are a map and history of the island, as well as an invitation from Mallery to personally call any book club that reads Three Sisters.

The final book of the Blackberry Island trilogy, as yet untitled, is scheduled for release in the spring of 2014.