P. Miller Makes History As The First Hip-Hop Entrepreneur To Own A Television Network, Is The Youngest Chairman In The Game, And Takes His Fast-Paced, Growing Brand to Wall Street. 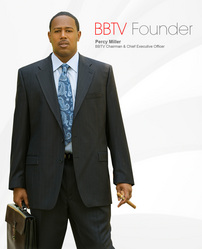 Percy Miller (formerly Master P) announces the launch of Better Black Television (BBTV) a family friendly network that will provide positive content for a black and brown culture that will appeal to all races with a goal to bring people of color a choice when turning on their television. The content on the channel will contain a wide arrangement from health and fitness, animation, financial planning, reality TV, sitcoms, dramas, movies, responsible hip-hop music and videos, politics, sports and entertainment news, educational children's shows as well as teen and family programming. Production has begun and will be based out of California, New York, Louisiana and Florida. In addition, BBTV is in the process of purchasing local cable channel affiliates across the country.

Born in Hollywood, Better Black Television is the brainchild and passion of some of the most diverse powerful, celebrated entertainers, influentials and trendsetters from the Television, Film, Professional Sports, Corporate America and Music industries. These visionaries all share the common goal of enhancing the current television landscape for this highly coveted demographic currently monopolized by only a few significant providers, with fresh, innovative, uplifting and above all family-friendly entertainment. Envisioned and headed by its Founder, P. Miller, a legendary music, film, and television entertainer as well as world-renowned African-American entrepreneur and social activist, Better Black Television is guided, staffed and supported by a highly skilled, talented, and above all dedicated team of professionals that have been working for more than 5 years to make this dream a reality.

"Better Black Television has been a vision of mine for some years," said Miller, BBTV's Chairman & CEO. "I've done a lot to promote and change the way messages are relayed to our children and our families over the last few years. Promoting positive content and positive messages is so important to educate and preserve the next generation. Being exposed to positive content is what changed my life. I believe that there is a market in our community for a new diverse network that provides a new brand of superior programming that caters to all aspects of television from reality to original programming. In addition, I'm excited to be able to expose the urban community to a vast array of jobs in the entertainment community that they might not otherwise be privy to. I have a great relationship with BET and MTV and my son and I will continue to do work with them and support their networks. With BBTV, we're spearheading the initiative to meet consumer demand for family friendly hip-hop content."

"We're extremely proud of our programming that will be airing on BBTV," said Miller. "It's extremely important to feed clean, quality, and positive subject matter to our families. We believe TV content can be positive and responsible and still have good ratings with great content. BBTV will offer all kinds of family friendly entertainment that everyone can enjoy. Our mission is to target the new generation of responsible African-American and multi-ethnic English speaking American and family oriented and responsible hip-hop consumers who are taking charge of their families and striving for a better tomorrow.

Better Black Television Mission Statement:
Better Black Television (BBTV) is committed to being a leading African-American multi-media entertainment company by establishing a distinct, valued, trusted, and socially responsible consumer brand within the African-American and multi-ethnic, English-speaking marketplace. We plan to accomplish this mission by delivering quality, family oriented entertainment and information to the quickly growing urban consumer base of our target audience through the use of television and Internet resources.

The vision of BBTV