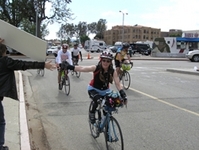 This will be Loree's third year participating in the AIDS/Lifecycle event, a grueling seven-day, 545-mile bike trek from San Francisco to Los Angeles.

The California personal injury attorneys of BISNAR | CHASE today announced their sponsorship of Loree Glenn, a Mission Viejo, California mother of two who is gearing up for this year's AIDS/Lifecycle event, a grueling seven-day, 545-mile bike trek…

The California personal injury attorneys of BISNAR | CHASE (BestAttorney.com) today announced their sponsorship of Loree Glenn, a Mission Viejo, California mother of two who is gearing up for this year's AIDS/Lifecycle event, a grueling seven-day, 545-mile bike trek from San Francisco to Los Angeles designed to end the pandemic and human suffering caused by AIDS. This marks the third year of Loree's ride and the third year BISNAR | CHASE has sponsored her efforts.

The trek raises funds to support the HIV/AIDS services of the L.A. Gay & Lesbian Center and the San Francisco AIDS Foundation, as well as to increase awareness and knowledge about HIV/AIDS among the ride's participants, donors and the general public. The ride takes place June 6 -12, 2010.

With the support of her husband, Kevin, and two teenage sons, Loree will make this trek for the third time, an experience she views as an extremely personal, mental and physical challenge to raise money for a great cause.

"For my first ride in 2008, I went from zero bicycling experience to training for a 545-mile trip," said Loree. "During that ride, I had problems with my knees and I ended up in the hospital with the stomach flu but I was determined to finish and I did."

Loree says she prepared much more extensively for her second ride in 2009, including training for almost a full year versus just four months the year prior, implementing yoga and pilates into her program, and riding three to four times a week along sections of the 1984 Olympic bike route in Mission Viejo. However, despite all of her preparation, last year's ride still presented Loree with some significant challenges.

"I had to overcome two back-to-back hills known as the 'evil twins' and one day, I rode an excruciating 94 miles," said Loree. "On top of that, I ran into some gravel, fell off my bike and had to be picked up by a sweep vehicle and taken to a rest area. Even still, it was the most fun and rewarding experience of my life."

With thousands of riders, an event of this size and scope requires plenty of manpower and logistical coordination. Average cycling hours start at 6:30 am and end at 7:00 pm, with traffic roadies pointing drivers in the right direction, route support that includes food, drinks, mechanics, medical personnel and restroom facilities, and sweep vehicles throughout the ride to pick up cyclists who fall too far behind to make it to the next rest stop. Overnight tents are supplied and riders are served a hot breakfast and dinner each day, and a sack lunch with plenty of snacks in between.

During the seven-day adventure, her husband mans the fort, taking care of the house, the kids and the chores while Loree pushes herself over hundreds of miles of terrain, including California's scenic Pacific Coast Highway 1.

"I'm extremely proud of my wife and the sheer dedication she brings to this cause," said Kevin. "Loree has taught our family that you can achieve anything in life if you put your mind and your heart to it. Beyond that, we've learned the importance of giving something back -- of looking beyond yourself to the needs of others, and doing what you can to make a difference."

Kevin says Loree has even recruited him to help her train, joining her on a recent roundtrip 50-mile bike trek from San Clemente to Oceanside. In May, he plans to join Loree and Team OC, a local group of cyclists who are training for the ALC ride, on a 65-mile excursion from Irvine to Solana Beach.

"A few months ago, I didn't even own a road bike," said Kevin. "This upcoming 65-mile trip will be a record distance for me. I might need a stretcher at the end but I'm determined to finish."

As part of its sponsorship, BISNAR | CHASE is providing a monetary donation for the AIDS/Lifecycle event, with 100 percent of the proceeds going to support the HIV/AIDS services of the L.A. Gay & Lesbian Center and the San Francisco AIDS Foundation, as well as technical support at Loree's personal ALC webpage created to help spread the word about the cause, her participation and the need for donations.

"This ride is such a commitment, such a challenge and such a sacrifice," said John Bisnar, founder of BISNAR | CHASE Orange County Personal Injury Lawyers. "Not only are we in awe of Loree's dedication to this cause, we're extremely proud to be her corporate sponsor. We know she's going to do a great job during this year's event and in future ALC rides. We wish her all the best."
About BISNAR | CHASE

BISNAR | CHASE is a Newport Beach, California personal injury law firm that represents people who have been very seriously injured or lost a family member due to an accident, defective product or negligence. The law firm has recovered hundreds of millions of dollars for its clients since 1978 by winning a wide variety of challenging personal injury cases involving traffic accidents, work place injuries and defective products, including defective automobiles, against some of the world's largest companies and governmental agencies. Additionally, the law firm represents people who have been seriously injured or lost a family member due to all types of cycling accidents, such as bicycle accidents involving cars, bicycle accidents involving other bicycles, dangerous road conditions and defective bicycle components. For more information, get a complimentary copy of John Bisnar's book, "The Seven Fatal Mistakes That Can Wreck Your California Personal Injury Claim."

This will be Loree's third year participating in the AIDS/Lifecycle event, a grueling seven-day, 545-mile bike trek from San Francisco to Los Angeles.