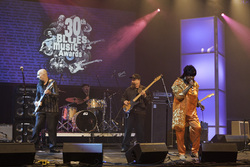 Less than three weeks before its 31st annual Blues Music Awards gala event, The Blues Foundation is pleased to announce that, beginning this year, the award for the Best Traditional Female Artist category will be hereafter known as the Koko Taylor Award. The first-ever Koko Taylor award will be handed out to one of five nominees at the Blues Music Awards gala event in Memphis on May 6, 2010.

A non-profit organization dedicated to the past, present and future of blues music, The Blues Foundation is pleased to bestow this (sadly posthumous) honor on the quintessential female figure in Blues music, especially in a year when its Board has elected it first female president, Pat Morgan.

“Koko was not the first, but she was the first of the modern female blues singers,” stated Executive Director Jay Sieleman. “She started in the ‘50s and never stopped. She was the ‘Queen of Blues’ until the very end, and we’re delighted to honor her by renaming the category she dominated for most of the Blues Music Awards’ 31 years of existence.”

Sieleman added that Taylor has already inspired many current female artists, including a number of this year’s female nominees.

Australian Blues singer Fiona Boyes, a nominee for this year’s Koko Taylor Award, expressed how grateful she is to have been able to finally see Taylor perform live, at last year’s awards. A long-time fan, she added, “When I first heard Koko Taylor, the resonance for me was profound. Here was someone that took all that raw energy and electricity and spoke, graciously yet powerfully, for the women.”

Zora Young, another nominee for the Koko Taylor Award, agreed. “I knew her over 40 years, and she was a wonderful mentor for me. I was so proud to know her and call her a good friend,” she stated. “As I travel along the blues highway, I see so many tryin’ to carry on her legacy. Many emulate, but none will ever duplicate.”

Speaking not only for herself but also the entire Blues community, nominee Ann Rabson noted the significance of this award category taking on Koko Taylor’s name: “She has inspired generations of blues artists with her professionalism and grit, thrilled millions of fans with music from her soul, and touched many, many lives with her warmth. We will miss her sorely, but her music and legacy will live forever.”

The 31st Annual Blues Music Awards – the highest honor given to Blues artists – will take place Thursday May 6 at the Memphis Cook Convention Center in downtown Memphis. Tickets are still available at http://www.blues.org.

The Blues Foundation is Memphis-based, but world-renown as THE organization dedicated to preserving our blues music history, celebrating recording and performance excellence, supporting blues education and ensuring the future of this uniquely American art form. Founded in 1980, The Blues Foundation has 3500 individual members and 185 affiliated local blues societies representing another 50,000 fans and professionals around the world. Its signature honors and events--the Blues Music Awards, Blues Hall of Fame, International Blues Challenge and Keeping the Blues Alive Awards--make it the international center of blues music. Its HART Fund provides the blues community with medical assistance while its Sound Healthcare program offers musicians health insurance access. Blues in the Schools programs and Generation Blues scholarships expose new generations to blues music. Throughout the year, the Foundation staff serves the worldwide Blues community with answers, contact information and news.