Until recently, anabolic steroid abuse remained shrouded in secrecy, relegated to covert locker room conversations. But with the advent of staggering 'roid busts, Sylvester Stallone's growth hormone charges, professional wrestling stars being suspended and Olympic athletes like Marion Jones coming clean about being "juiced," it was only a matter of time before art mimicked current events. 'Roid abuse in Governor Schwarzenegger's former sport of bodybuilding pumps up for the Hollywood treatment in a new independent film entitled, Ruthless, created by filmmakers who once competed in the amateur ranks of the sport. Set to begin production the coming year, the film promises a raw and unapologetic depiction of a world few have witnessed outside very tight knit circles. 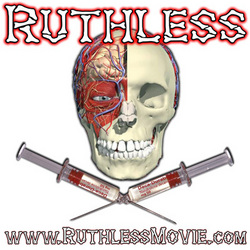 We felt audiences might have a hard time accepting how widespread it is. But so much has been exposed now that public awareness caught up to the reality our project depicted from its inception. It was a difficult decision, but I think it was wise to wait because the film will be better received now.

Not long ago, anabolic steroid abuse remained a fringe eccentricity, but with recent Congressional hearings, major DEA busts, Hollywood stars like Sylvester Stallone being charged with growth hormone possession, Olympic athlete Marion Jones admitting to being juiced and professional wrestling stars being suspended, 'roids have come out from the shadows to occupy national headlines. And as a sign of our times, the subject is headed for the big screen in a new independent film entitled, Ruthless, which depicts a raw and unapologetic dramatization of steroid abuse in Governor Schwarzenegger's former sport of bodybuilding.

Producer, Robert J. Feldman states, "Actually, this isn't anything new for us. We were set to produce the film over twelve years ago with a couple known bodybuilders playing the leads and a major former champion in a supporting role. But the timing just wasn't right." Feldman's independent film company turned down a significant funding offer from a private source because they felt more time was needed to bridge the gap between cultural perception and the reality of steroid use. Writer/Director, Torjan explains, "We felt audiences might have a hard time accepting how widespread it is. But so much has been exposed now that public awareness caught up to the reality our project depicted from its inception. It was a difficult decision, but I think it was wise to wait because the film will be better received now."

Ruthless follows the story of three amateur bodybuilders who decide to deal black market steroids to bankroll their compulsive lifestyle and quest to turn pro. The independent film stops shy of claiming to be inspired by actual events, freely admitting to creative dramatizations, "I wouldn't call Ruthless a true story, but it's fair to say it's a compilation of real events entwined with the more popular myths shared around most gyms. Imagination is the glue that bonds everything into a coherent plot and entertaining story the audience can enjoy. This film is for everyone, not just bodybuilders." states Torjan, the film's director.

Make no mistake, this is no Pumping Iron. Unlike Governor Schwarzenegger's starring vehicle in his innocent cinematic predecessor, Ruthless transposes the sport of bodybuilding from idyllic pastime into hard edge drama. Feldman explains, "We're opening Pandora's box. If you're going to make a film about steroids, then bodybuilding has to be at its epicenter. They're two sides of the same coin, whether people care to admit it or not. But our film neither condones, nor passes judgment on 'roid use. It's a film about obsession and desire, and possibly the first ever to freely and accurately depict steroid use and the associated ramifications." Torjan clarifies further, "The biggest misconception people have about steroids is that it's cheating. Every athlete was born with genetic gifts others don't possess. Juiced or not, they work hard for achievements few could replicate. Our film might help soften the stigma for users while deglamorizing the 'roid allure. These aren't substances to be toyed with. Sometimes people forget that because they're tied to activities that promote longevity."

And the creativity doesn't stop with the film itself, they're getting creative with independent film financing as well, "Product placement in film has become a must and we're exploring our options. There's obvious choices like gym franchises, equipment and vitamin supplements, but we're also thinking of approaching pharmaceutical companies to see if they'd like to place their products in our film. If their advertising dollars are good enough for the evening news, then why not to support an independent film?" States Feldman, half serious, half in jest.

The independent filmmakers are structuring the project with an eye for Ruthless to begin production in the coming year followed by a theatrical release soon thereafter.