The Art of Collaboration with Jack Pierson 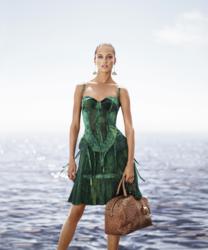 Bottega Veneta is pleased to announce that artist and photographer Jack Pierson has shot the brand’s Spring-Summer 2012 advertising campaign. The campaign, which features the women’s and men’s ready-to-wear collections, was shot in October of 2011, on location in Coconut Grove, Florida. It is the latest in Bottega Veneta’s one-of-a-kind creative collaborations featuring the talents of outstanding artists

The Spring-Summer 2012 collection is an exuberant exploration of diverse materials, unusual finishes, and exaggerated prints. The palette is vivid and saturated, filled with purples, blues, greens, and reds. The silhouette is architecturally rigorous but sensuous, a combination of tailored angles and fluid lines that keep close to the body. Accessories are bold, luxurious, and intricately worked, mixing color, texture, and technique with artful abandon. The unusual balance of technology and artisanal craftsmanship evident in each piece lends the collection a particularly expressive sophistication.

Jack Pierson is a celebrated contemporary artist known for work that ranges across many media, including photography, collage, drawing, painting, and installations. This diversity makes it difficult to categorize Pierson’s art, though virtually everything he makes evinces a compelling combination of emotional vulnerability and formal sophistication. Pierson’s photographs often read like a diary, combining elements of nostalgia, loneliness, the romantic ideal, and a search for beauty. The artist, who splits his time between New York and Southern California, has had numerous solo exhibitions and participated in group shows around the world. His work is included in the collections of the Museum of Contemporary Art in Chicago and the Guggenheim in New York, among other prestigious institutions.

The mix of emotional depth and formal rigor that Pierson brings to his photographs are what led Bottega Veneta Creative Director Tomas Maier to approach him for the Spring-Summer 2012 collection advertising campaign. “I’ve admired Jack’s work for many years, especially his ability to create images that feel at once precise and spontaneous. I was interested to see what he would bring to this collection, which combines meticulous technique with a spirit of freedom and exploration,” he explains. “I’m very happy with the result. Jack’s images capture the complexity as well as the joy of the collection.”

A video documenting the photo shoot will be added in February to the Art of Collaboration video series at bottegaveneta.com

Discretion, quality, and craftsmanship — Bottega Veneta has created a new standard of luxury since its founding in Vicenza in 1966. Steeped in the traditions of Italy’s master leather craftsmen and long celebrated for its extraordinary leather goods, Bottega Veneta has recently emerged as one of the world’s premier luxury brands. The company’s famous motto, “When your own initials are enough,” expresses a philosophy of individuality and confidence that now applies to a range of products including women’s and men’s ready-to-wear, fine jewelry, furniture, and more.

While Bottega Veneta continues to grow, the qualities that define it are unchanging: outstanding craftsmanship, innovative design, contemporary functionality, and the highest quality materials. Also constant is Bottega Veneta’s commitment to its ateliers, where artisans of remarkable skill combine traditional mastery with breathtaking innovation. Indeed, there is an unusual and inspired collaboration between artisan and designer at the heart of Bottega Veneta’s approach to luxury, symbolized by the house’s signature intrecciato woven leather. In the summer of 2006, in recognition of the importance of artisanal craftsmanship and the fragility of this traditional way of life, Bottega Veneta opened a school to train and support future generations of leather artisans.

The most recent chapter in Bottega Veneta’s history began in February 2001, when the company was acquired by PPR Luxury Group, formerly known as Gucci Group. Creative Director Tomas Maier came on board in June of that year and presented his first collection, Spring-Summer 2002, to immediate critical acclaim. From the start, the house’s sensibility was refined, sensuous, and intensely personal, designed for a customer who is sophisticated and self-assured. In the years since, Bottega Veneta has introduced exciting additions to the collection, including fine jewelry, a watch, furniture, and home accessories, while continuing to offer an exclusive and coveted assortment of ready-to-wear, handbags, shoes, small leather goods, eyewear, luggage, and gifts.