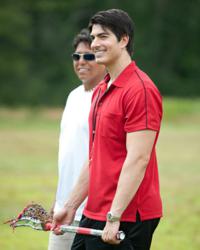 US Lacrosse, in partnership with the filmmakers from the upcoming feature film release “Crooked Arrows,” has announced that the film’s star, Brandon Routh, will attend the US Lacrosse National Convention, presented by Champion, Jan. 13-15 at the Pennsylvania Convention Center in Philadelphia, Pa.

Routh and producers J. Todd Harris and Mitchell Peck will be in attendance as the film’s official trailer is unveiled at 7 p.m. Friday, Jan. 13, prior to the keynote address delivered by former Philadelphia Eagle and NFL head coach Herm Edwards. Expected to attend will be 5,000 lacrosse coaches, officials, administrators, trainers, players and fans. Additionally, as part of an ongoing promotional partnership, the trailer also will debut at that time on the US Lacrosse Facebook page at facebook.com/USLacrosse.

Routh also will participate in a meet and greet/autograph session at the “Crooked Arrows” booth from 12-2 p.m. Saturday, Jan. 14, at the US Lacrosse Fan Fest. Immediately following his appearance at Fan Fest, Routh will meet with the media.

“Crooked Arrows” chronicles the unlikely rise of a Native American team to a prep school league championship and is slated for release in theaters during the spring 2012 lacrosse season. Routh stars as Joe Logan, who is tasked with coaching his Native American reservation’s high school lacrosse team against the better equipped and better trained players of the elite Prep School League.

Most notably, Routh previously starred as Clarke Kent/Superman in the 2006 film “Superman Returns.” Although he had relatively few professional credits to his name, the handsome and clean-cut Routh soared into the media limelight when he was cast as the Man of Steel in director Bryan Singer’s highly anticipated revival of the original superhero film franchise. He has a thriving career in both television and film, which has included recurring roles on NBC’s “Chuck,” “Cold Case,” and “Will and Grace,” as well as the theatrical cult hit “Scott Pilgrim vs. The World.”

The US Lacrosse Fan Fest is open to the public from 11 a.m. to 4 p.m. Jan. 14. Fan Fest will feature demonstrations by players from the U.S. national teams and the Philadelphia Wings on the STX Live Field, and an appearance by the crew of the upcoming “Crooked Arrows” lacrosse feature film. Autographs will be available. Fan Fest also includes the sport’s largest exposition hall, featuring 140 vendors with lacrosse gear, equipment, apparel and services. Fan Fest tickets are $10 onsite at the convention center, and just $5 for players wearing lacrosse team jerseys. Fan Fest info also is available at USLacrosse.org/2012convention.