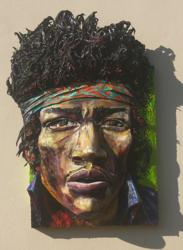 Brett Stuart Wilson continues to bring the Hip Back to The Walls by creating his Larger than Life built-out paintings of iconic musicians. Ten selections of his new artwork will be displayed along side one of his older pieces that is owned by Sascha's and is prominently hung over their Bar; "The Shirelles, 1984."

His driving inspiration has been to demonstrate that portraits do not always have to be an image of perfection but can encompass lumps, bumps, and assemblage to show dimension. Brett's newer work shows a progression towards more realism and less caricature with the same rawness that reflects the electrifying drama of the stage lights and dimly lit nightclub funk. It is also important for him to put a face on some of the most influential musicians that have helped shape the music of today.

Brett Stuart Wilson received his MA at the University of Wisconsin, Madison and his Masters of Fine Art at Virginia Commonwealth University, Richmond VA. He is a reciprocate of a National Endowment for The Arts/Individual Artist/Painting Grant, and has been published in National Art, Music and Business Magazines. His work is internationally owned in private collections, to include the prestigious Sylvio Perlstein' in Paris, France. He has lived all over the world including Baltimore, MD, where he fronted a Blues Band for a while and currently owns a home and studio in Harford County with his wife, Jamie.

In January, he was interviewed and featured in "106 SUPER HOT ARTISTS FOR 2013" in NYC's http://www.ArtBookGuy.com blog. Michael Corbin, who is an art collector, art book writer and blogger, included Brett in his international selection of visual artists as a recognition for their outstanding talents.

His work bridges the gap between his passion for art and his appreciation for the mavericks of music. The process starts with wood and wire and then builds upon by layering, shifting and manipulating muslin, various found objects, paper and acrylic paint until it becomes an unconventional portrait. These larger than life paintings rely on paint, surface building and graphic illusion to portray their dimension.

Take this opportunity to come out and meet the artist on April 3rd or visit later and enjoy the food, ambiance and Brett Stuart Wilson's artwork until June 22,2013.