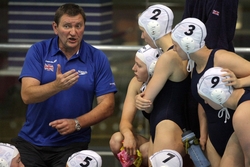 I think the first quarter will be really interesting. Both teams will be working each other out and seeing what the other has to offer.

Loughborough are set to play hosts to the British Women’s Water Polo Team, powered by British Gas, as they take on Israel in their first European qualification match.

The sold-out match is due to begin at 8pm on Saturday at the Loughborough University Pool - the first time a European qualification match has been played in Loughborough.

With their eyes firmly set on London 2012 the team are looking to impress on the international stage, and Saturday’s clash against Israel will be the first step in their journey.

While quietly confident, captain Fran Leighton insists the team are taking nothing for granted ahead of the match.

“I think the first quarter will be really interesting,” said Leighton, who is nearing a return to first team action after missing the opening months of the season through illness.

“Both teams will be working each other out and seeing what the other has to offer.

“Realistically we should come out on top but we’re not going to have a clue what they’re like until we see them warming up before the match.”

Visitors Israel are an unknown quantity in women’s international Water Polo, having been beaten by Great Britain in the 2004 European B Championships in France but almost disappearing off the radar since.

Although the British women have 14 competitive matches under their belts this season from competing in the Hungarian National League, the visit of Israel will be their first international since June 2010.

And Leighton insists the British team have no doubts over where their priorities lie, having missed out on last year’s Europeans by a narrow margin.

“We’ve been playing competitive matches every other weekend this season so it’s become a regular routine,” said Leighton.

“But as much as we care about the Hungarian League, the Europeans are the more important competition for us.

“It will be a totally different atmosphere to playing in Hungary and we’re all really looking forward to it.

“We had a tough qualifying group, losing out to the Dutch and Greece in the end, but while we were okay with that last year, we wouldn’t be happy not qualifying this time.”

A top-two finish in Group B, which also features 2008 silver medallists Spain and Ukraine, would see the Brits progress through to the 2012 finals in Eindhoven.