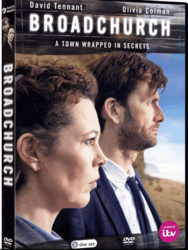 The Broadchurch DVD is released on 20 May 2013, but fans can order their copy today from Acorn Media for a reduced special offer price.

The Broadchurch DVD is released on 20 May 2013, but fans can order their copy today from Acorn Media for a reduced special offer price.

Starring erstwhile Dr Who David Tennant and Peep Show’s Olivia Colman, fresh from her award turn in Tyrannosaur, the all new ITV drama features the popular pair as police officers on the hunt for a missing school boy in the Dorset town of Broadchurch; on the eve of the summer tourist season.

The edgy new show is viewed as an antidote to the picture postcard atmosphere of hit British crime shows like the massively successful Midsomer Murders. Here, a grisly murder sets off a devastating chain of events through the local seaside community, and seeps into the cracks of local relationships.

With clear inspiration from extremely popular Scandinavian crime shows like The Killing, Broadchurch is more than just a murder mystery. It is the study of an ordinary community in the wake of a terrible tragedy.

Olivia Colman stars as Ellie Miller, a police officer forced to investigate the disappearance of her best friend’s 11 year old son, Danny. Having recently been passed over for a promotion, Miller must work with her new boss to solve the mystery of a grisly murder. Her boss DCI Alec Hardy, played by David Tennant, is an investigator formerly of the Met, who is haunted by the failure of a high profile case. Together, the pair must see past their differences and solve the murder of a young boy. Meanwhile, various conflicts erupt within the local community.

Fans of Great British crime drama will love this grisly new show, set on the nation’s evocative Jurassic coast. The Broadchurch DVD is expected to be a hit, and it makes a great deal of sense for customers to pre-order their copy from the Acorn Media online store as soon as possible; to take advantage of a special reduced price.

Visit the Acorn Media online store today for more information, and the chance to pre-order you copy of Broadchurch on DVD today.