Car Guy Nation will kick off its first interactive social promotion in the motorsport arena this week with the Aston Martin/Gentleman Racer Campaign. 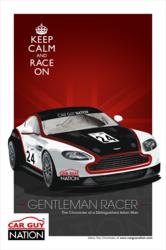 Car Guy Nation will kick off its first interactive social promotion in the motorsport arena this week with the Aston Martin/Gentleman Racer Campaign. The series will follow a SCCA Major racer through his 2013 racing season, providing an up close and personal account of the day-to-day realities he faces on the track and behind the scenes. Presented as a sequence of personal video narratives, reflecting multiple perspectives through the eyes of the driver himself, as well as the team manager, mechanic and others sharing and supporting the driver’s racing aspirations. It will feature the first “privateer racer” in North America competing with the Aston Martin Vantage GT4 car sponsored by Car Guy Nation.

In the proven tradition of reality TV, the “story line” will depict the key characters in their everyday surroundings, monitoring all of the triumphs and joys, trials and tribulations that come with competition racing and the lifestyle that underlies this particular gentleman racer’s drive and passion to compete. With a nod to Aston Martin’s British heritage, the story will carry the thematic tag line, “GENTLEMAN RACER: The Chronicles of a Distinguished Aston Man.” The campaign starts this week with the installation of the custom Car Guy Nation livery wrap and ends with the last race in late August. The action will be filmed in the shop, around the paddock and pits and, of course, on the track.

“With this campaign Car Guy Nation will give automotive enthusiasts an unprecedented view into the lifestyle of a gentleman racer. Aggregated on carguynation.com, a flow of social content in the form of videos, photos, and commentary will be both generated and redistributed through social networks like Vine, Twitter, Facebook and Instagram,” said Mike Chapin, SVP, Digital. “The content will allow our ever expanding network of car lovers and racing fans the opportunity to engage with and follow the unveiling story of the Gentleman Racer as it emerges over the course of the season. They can easily access the content and promotions on their desktop, tablet or mobile devices via their preferred social network or at carguynation.com.”

"Video interaction will provide a unique platform for product placement and promotional opportunities for our vendors,” said Allan Greenfield, SVP, Vendors. “Contests and giveaways will revolve around real-time communication with our audience and create an ongoing dialog, humanizing the characters and providing unmatched exposure for all parties involved.”

“Last year we created and executed a similar campaign sponsored by the Scion division of Toyota called, 'The Scion Road to SEMA.' It was a huge success. Car Guy Nation’s interactive social promotions are designed to help drive potential customers to all the participants involved in the campaign. The Scion promotion not only generated benefits for our vendors and provider partners, but also the Scion dealer network, the Scion/ Toyota Corporation and, finally, Car Guy Nation,” said Robert Minnick, CEO, Car Guy Nation. “We believe this far more ambitious Gentlemen Racer campaign will help generate even more awareness for all of our Marketing and Vendor partners, as well as the Sport Car Club of America (SCCA) and Aston Martin Racing."

Car Guy Nation (http://www.carguynation.com) offers the largest selection of automotive lifestyle products and services at the lowest possible prices. From one-of-a-kind, car-related collectibles to performance parts and accessories, it's more convenient than any single store; indeed, it's a Nation for car guys.