Andertoons.com is celebrating its 10th anniversary and cartoonist Mark Anderson is still crazy about cartoons. 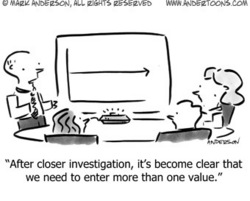 One of Andertoons' popular cartoons

“I’m always looking for the next new thing online. It can be difficult to keep up, but it’s really exciting too,” says Anderson.

“You think you’d notice, but you sit in your studio and you write and draw and laugh and then all of a sudden a decade has gone by!”

The popular website launched while Anderson worked for another company. Drawing at his living room coffee table he’d already sold cartoons to a number of major publications and was looking for some new markets.

“I’d just talked my wife into buying our first computer, and I didn’t know much about websites. The first site was unbelievably basic with just a few cartoon samples, but once I’d gotten a few visitors I couldn’t stop tinkering.”

Soon after that, the cartoonist left his job to write and draw full time, and Anderson has been steadily innovating since.

“For example, I remember calling my developer early on and telling him I wanted to add a blog to the site. He said ‘I’m sorry, I don’t know what that is.’ It was right before blogging had really hit, and I’m sure he thought I was crazy, but it turned out pretty well.”

In addition to enjoying his popular blog, visitors to Andertoons.com can:

“I’m always looking for the next new thing online. It can be difficult to keep up, but it’s really exciting too,” says Anderson.

So how has one cartoonist with a website competed with giant corporate stock image sites? Anderson likens his business to a pizzeria.

“Let’s say you want a pizza. You can go to the supermarket and get yourself a frozen pizza; you’ve had it before, it tastes fine, and you can probably get it cheaply because it’s mass produced. It’s OK.”

“Or you can call your local pizza place and order special toppings you can’t get anywhere else, buy something that’s fresh and tastes great, and although it may cost a bit more, the guy behind the counter always says thanks and asks about the kids.”

The busy cartoonist is also excited about a new idea he’s launching this summer.

“My wife and I were at one of those summer arts and crafts shows, and she suggested that this could be another way to sell my cartoons. The rest of the summer I went to every art fair I could find and bought myself a big tent, some frames and mats. In May I’ll be in my very first show selling prints, original art, and books.”

Anderson will be announcing show dates and locations on his blog. To enjoy his cartoons right now, visit http://www.andertoons.com.

Andertoons.com is one of the web's top cartoon websites. Cartoonist Mark Anderson’s cartoons are perfect for livening up newsletters, presentations, textbooks, magazines, or anything else that could use a good laugh. His work has appeared in publications including The Wall Street Journal, Reader’s Digest, Forbes, and Good Housekeeping. He lives in the Chicago area with his wife, son, daughter, dog, cats, and numerous dust bunnies.

Cartoon Sample 2One of Andertoons' many cat cartoons.