Techniques to be reviewed at event in Mesquite about 80 miles north of Las Vegas. 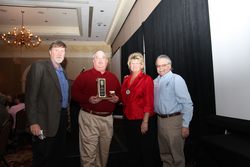 Merle Whitebook, right, is shown with from left, Don Harwell; and Joe and Voncille Amore

This will be something the judges will never forget

To say that Merle Whitebook is constantly on-the-run is a definite understatement. An accomplished cook in his own right, he is also a certified BBQ judge and highly-respected member of the Kansas City Barbeque Society who teaches classes about judging used on the KCBS’s schedule which includes 335 events each year.

One event – the second annual Smokin’ in Mesquite BBQ Championship at the CasaBlanca Resort on Labor Day Weekend – will feature Whitebook teaching a class on judging techniques.

The class, which is open to the public, will be Thursday, Sept. 2 at the CasaBlanca with check in set for 5:30 p.m. The class is scheduled from 6-10 p.m. There will be a charge of $50 for KCBS members and $85 for non-KCBS members.

“He is an incredibly passionate contest representative and board member of the KCBS,” praised KCBS executive director Carolyn Wells when speaking about Whitebook. “He is also highly-regarded by all of the teams. We will never be able to get inside everyone’s taste buds to see what they like, but Merle does an excellent job of making sure people understand how BBQ is judged.”

Events like the Smokin’ in Mesquite BBQ Championship encompass everyone from Backyard BBQ participants who dabble with the sport on the weekends to the pros who travel all over the country cooking up ribs, chicken and pork while chasing big paydays.

In the case of the Smokin’ in Mesquite competition, a $40,000 purse is included thereby creating the biggest payday in the KCBS schedule. Whitebook’s expertise as it relates to the event at the CasaBlanca is tantamount to John Madden explaining the science of the National Football League during a national television broadcast.

“We have 14,000 members world wide, 15,000 certified judges and 4,600 active cooking teams,” adds Wells, who along with her husband, Gary, founded the KCBS. “This has become a whole sub culture or super culture and it’s pretty amazing where this has come in 25 years.”

In fact, the BBQ culture has expanded into NASCAR in what would seem like a natural marriage considering that the infields of NASCAR Sprint Cup races always feature endless lines of BBQ setups. The 2010 lineup of BBQ competition now includes stops at Talladega, Michigan and Daytona, and there is little doubt that the KCBS competition is destined to expand to other tracks in the future.

The timing could not be better for classes explaining the BBQ process, and Whitebook is bringing a dandy bit of education for those interested in learning about the judging aspects of the competition.

“The first two hours will cover the rules of BBQ and how to judge the process,” explained Whitebook. “The second half will be a mock contest where the members of the class will actually judge a mock BBQ contest.

“The students will be trained in chicken, pork ribs, pork butt or shoulder and brisket. Each one of the judges will evaluate the entry based on the appearance of the meat. Each judge will utilize the scores of 9-2 with nine being excellent and 2 being inedible in order to judge the BBQ.”

Whitebook, 57, and a resident of Bartlesville, Okla., said he has been conducting the classes for several years. The class has been changed slightly, but the response has always been excellent.

“It works well because when teaching the class we are teaching consistency amongst the judges which is a very lofty goal taking a room full of 50 judges and figure they will all be consistent in the scores they give. We make it a lot of fun. The judges start making fellowships and being a part of the BBQ family.”

Whitebook said each of the judges needs to bring their eyes, their nose, their hands, their pallets and an open mind.

“This will be something the judges will never forget,” said Whitebook adding that all participants will learn the KCBS scoring; what’s allowed and not allowed; display techniques; and all contestants get to feast on the BBQ they judged.

“At the beginning of the class and every contest, it’s not what the contestant likes but what is proper by the standards of the Kansas City Barbeque Society. We ask each judge to evaluate every entry on its merit. That’s the key of what we do because I don’t want them to judge on their favorites only. We have regional differences. In North Carolina, it’s vinegar base, in Memphis it tends to be a dry rub and in Kansas City we’re talking about a sweet tomato base sauce.

“In the western states many of the fruits come into play. Therefore we ask the judge not to judge based on their favorite but on how the cook succeeded in presenting to the judge a flavor profile that enhances the meat product and exhibits the highest level and skill of the culinary art of BBQ.”

Now in its second year, the Smokin’ in Mesquite BBQ Championship is expected to draw teams from all over the country. Last year’s event was won by the Sweet Peppers team of Jim Ballog of Albuquerque, N.M. and Adrian Sanderson of Pueblo, Colo.

Both events are being sanctioned by the Kansas City Barbecue Society.

Further information regarding this year’s event can be found by visiting http://www.mesquitebbqchampionship.com or by calling Christian Adderson at 888-711-4653, ext. 51.

2:00-2:30 PM
Team Eating Challenge- Must have 5 team members to participate and all members must be at least 21 years of age

2:30- 2:45 PM
Pie Eating Contest sponsored by Universal Bakery-Youth- Must be 12 years of age or younger

3:30-4:00 PM
Malibu Rum Runner Daiquiri Challenge- Must be at least 21 years of age to participate

6:00 PM
BBQ Awards and People’s Choice will be awarded