Animal Planet’s “Tanked” to reveal the glories of the Catskills hotel's most splendid digs to date on April 5, 2013 at 9:00pm EST. Air dates from visits of other TV networks including HGTV and TLC to be announced. 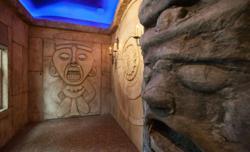 No doubt that’s what the producers of Animal Planet’s hit show “Tanked” were thinking when the series’ stars, Wayde King and Brett Raymer, filmed the installation of one of their custom-made wow-factor aquariums for the space.

The most opulent, outrageous, and over-the-top accommodations at The Roxbury, the Catskills' glamorous and award-winning hotel, are now open for business and drawing a crowd – of television cameras. Inspired as they are by the daring exploits of certain leather-bomber-jacketed adventurers of archaeology’s Golden Age, The Archaeologist’s Digs are also mysterious, astonishing, and downright adventurous. But did we mention the luxury comfort factor?

The free-standing 3-bedroom, 2-bath cottage sleeps six oh-so-comfortably, invites exploration, and entertains infinitely. No doubt that’s what the producers of Animal Planet’s hit show “Tanked” were thinking when the series’ stars, Wayde King and Brett Raymer, filmed the installation of one of their custom-made wow-factor aquariums for the space. The episode of “Tanked” which features The Digs is currently scheduled to air on April 5, 2013 at 9:00pm EST on Animal Planet (dates subject to change, please check local listings).

The Roxbury’s proprietors, Gregory Henderson and Joseph Massa, known for their style and humor and ability to channel fun versions of America’s popular culture into their rooms and suites, bought up a cache of exotic treasures from the estate auction of a mysterious neighbor’s lifetime in the American Foreign Service, let it inspire this latest expansion, and created a cool legend associated with the expansion to make sense of it all. “From the moment we first saw this incredible stash of exotic tchotchkes from all over the world, we knew we had the inspiration for our next project,” explained Gregory Henderson. “And when you combine those treasures with jaw-dropping room surprises like showering next to a golden ancient Egyptian sarcophagus inside a 400-gallon saltwater aquarium and secret passageways and way-opulent furnishings and fixtures, well, then you have the solution to our never-ending dilemma of how to give our guests even more wow-factor room experiences or ‘roomcations' as we call them. So if it's bad weather outside or you're feeling lazy, you can experience an adventure without even leaving your hotel room.”

Dig a Walking Tour? The Digs Adventure Begins Upon Entering Through:

With its floor-to-ceiling wallcoverings in a damask-style black-and-white-and-gray pattern, which closer inspection reveals to actually be of intertwining hissing serpents. Be careful to mind the humongous boulder suspended in mid-crash overhead and the wall sculpture of the ancient Mayan stone God daring guests to find its secret lever that turns it into a doorway passage into the…

While actually the smallest of the three bedrooms, it somehow seems the most massive, thanks to the masterful scenic painting depicting soaring ancient Mayan Tomb stonework and an inky night sky conveying the complexities of the whole Mayan cosmos. Pull the nose ring in the head of the life-size Mayan idol sculpture at the end of the room, and an offering sacrifice to the Gods of Slumber is discovered: the ring activates an ingenious Murphy bed that reveals a painted backdrop of Mayan jungle pyramids at sunset as it descends onto its resting place on the mosaic-stone floor. Exit back through the foyer (again mindful of the looming ceiling boulder) and step up into the…

Although guests will find an Internet-ready 55” television with surround sound entertainment system here, and a blue-ray DVD player, and a docking station for iPod and iPhone, and a fully-stocked gourmet kitchen with state-of-the-art appliances, and a queen-sized leather sleep-sofa, that’s it for 21st century technology: everything else is “ancient” or exotic, or both. “The Sultan’s Tent” dining area features a ceiling-high Arabesque tent. In the fireplace, flames erupt out of the head of an Aztec God. A stone archway bar seats eight and features a hidden solar tube that directs the first shafts of morning light onto a golden Mesopotamian statue. Overhead, hanging from the timbered ceiling, is a custom wrought-iron 6’ x 4’ “King Arthur” chandelier, just for good measure. Faded “treasure maps” line the walls and ceiling, revealing each archaeological conquest that brought all these artifacts home to The Digs. Just outside, the dining patio accommodates al fresco dining and lounging with its two generous umbrella tables.

On the opposite end of the living area stands a nine foot tall Egyptian column next to which the scroll bearing the history of The Digs and its ancient curse is posted. But it is what is found next to the column that is the marvel of the entire Digs experience – a 400-gallon saltwater aquarium with a life-size golden sarcophagus inside signaling that this is indeed the long lost underwater tomb of Cleopatra. To protect and keep her majesty company throughout eternity inside the tank, there are colorful fish and other sea life indigenous to the waters of her hometown port, Alexandria, Egypt — some, like that fateful asp, are quite venomous. This remarkable water feature, designed and installed by the stars of Animal Planet’s hit show “Tanked”, will have its unveiling on the show on April 5, 2013 at 9:00pm EST. And until that time, The Roxbury is embargoed from publishing photos of the aquarium. Looking deep into the waters of the tank (wait a minute was that a moray eel or a swimming snake I just saw?), confusing shafts of light are seen coming through the side wall. Is that Cleopatra’s curse vaporizing into fruition? Oh no, it’s just the….

Which replicates… well… showering in an ancient tomb belonging to an exalted personage who was accustomed to surrounding herself with glittering gold and rare treasures. A masterpiece in trompe l’oeil painting, the bathroom draws your eye up along hieroglyphic-ed stone walls, to shafts of light breaking through the top point of the pyramid in the center of the ceiling. Golden glass tiles line the shower, where the only separation between a bather and the saltwater fish from the Red Sea is a wall of crystal clear acrylic (and on the other side of the wall is the living room). So you hopefully won’t mind the fish watching you lather up, but if privacy from suitemates is a concern, just flip the wall switch next to the shower and the acrylic wall of the tank on the living room side will instantaneously fog up. So the fish are with the guest while showering but no one else can see the showering guest! Step out of the aquarium-shower experience, slink into one of The Roxbury’s complimentary comfy robes, and open the bathroom door back into the…

Library Hallway of the Secret Doors

The Cleopatra's Tomb Bathroom is actually one of the five secret rooms that are at first glance not visible while standing in the deceptive hallway. Where are the doors? Does one push one of these 3-D books that strategically protrude from the bookshelf wallpaper? What will happen if a book is pushed here? Oh my goodness, the concealed doorway leads into…

And people say Cleo's bathroom has a lot of gold? Well they ain’t seen nuttin yet. In the bedroom all that glitters IS gold - 18K gold-leaf to be exact. The shimmering woodwork sets an opulent stage for all 300-lbs of the gilt mahogany bed and the gold-leafed throne gleaming under the polished brass Egyptian chandelier imported from Cairo. The trove of treasures calculated to make any Queen of the Nile feel right at home include gilded Pharaoh busts, Egyptian idols, and Alexander the Great’s battle mask. The real gem of the bedroom, however, may well be its alternative bathing facilities. Outside, through a solid glass door, a completely private pyramid-inspired ensuite outdoor shower with a custom hand-hammered copper shower floor is presided over by busts of Mark Antony and Cleopatra herself – and illuminated by recessed LED lights in a regal rainbow of color. A regal rainbow of color. Now say that three times fast… But perhaps this is all too much glamour? Too girly perhaps? Then step back out into the library hallway, try another book, and discover the antithesis of this bedroom. Change the mood and experience…

The Leather and Bullwhip Bedroom

Which is a perfectly wholesome interpretation of Hollywood’s iconic archaeological-action-adventure style. (Please do not confuse this with another genre. No 50 Shades of Roxbury here…) With distressed leather walls and ceiling, a dramatic canopy of forty radiating bull whips, and rivets galore, it should be no surprise that the hat left behind by a recent occupant is a battered brown fedora. Did the whips excite a little too much? Never fear, just step back out into the library hallway to find…

The Leather and Crocodile Bathroom

This bathroom serves the bullwhip bedroom and is an ode to exotic (waterproof) skins and surfaces. Besides the convincingly leather-like brown tiles surrounding the bathtub and the convincingly crocodile-skin-like floor tile (both imported from Italy), various crocodilian features provide interesting food for thought while soaking in the 24” deep tub (luxurious eucalyptus bath salts compliments of The Roxbury). While relaxing in the tub the mind starts to drift into a zen-like trance until consciousness is suddenly regained with the thought: "Wait a minute, weren't there supposed to be FIVE secret rooms? Only four have been experienced so far. Where is the fifth? Hmm, where hasn't a protruding book been finagled with yet? Oh wait a minute, there was that one wall... Oh yeah, here it is! But one must pull instead of push. Oh my, it’s dark in here in this, this, this…”

Doesn’t every cottage have one? This tiny cave of a space, complete with stalactites and stalagmites, prehistoric paintings, glistening calcium deposits, and buried human fossils, is where guests can spy into the living area through the backs of tribal masks hung on the living room wall. So if "you always feel like someone's watching you" – well in The Digs there may very well be...

Is a breath of fresh air suddenly in order? A quarter acre of stone pathway paralleling the meandering East Branch of the Delaware River culminates in steps down a small hill to a stonework dining platform at water’s edge. The pathway is illuminated at night with an assortment of gentle colors that can be changed to suit the season, holiday, or one's spirits. At night, open the windows and listen to the tranquil sounds of the river babbling over its stones and twists and turns.

Of course, the best way to experience The Digs is to just set a date for adventure and come visit. And remember to tell friends when they first arrive and start taking it all in: if they're wondering if there might be something mysterious yet glamorous lurking behind any given wall, well there probably is.

For the press, a dedicated media page with hi-res photos of The Digs is available upon request.

The Roxbury is the ideal destination for that long-awaited fantasy vacation, fun weekend, mid-week spa getaway, or small meeting or conference. It is under a three-hour’s drive from The Big Apple and the New York tri-state area, Albany, and Philadelphia. The Roxbury welcomes families, meeting groups, singles, lovers and other strangers. Its guest register now includes visitors from more than 48 countries all seeking a break from the if-I-have-to-stay-in-another-beige-and-taupe-earth-toned-cookie-cutter-hotel-room-I’m-just-gonna-pass-out-syndrome.

The Enchanted Living and Entertaining Area

The Library Hallway of the Secret Doors

The Ancient Scroll Revealing the History of The Digs

The Digs Stone Pathways in the Snow

The East Branch of the Delaware River Alongside The Digs

Decorative Fixtures Take the Shape of Golden Idols and Gods

Decorative Fixtures Take the Shape of Golden Idols and Gods