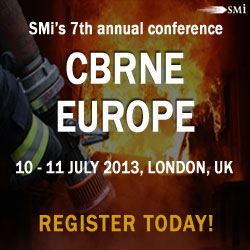 One of the major challenges facing governments and whole nations is the increase of CBRN-E (chemical, biological, radioactive, nuclear and explosive) cases. With incidents such as the Fukushima nuclear power plant crisis and the deliberate release of toxic chemicals in Afghanistan in 2009 and 2010, governments are authorising funding for public preparedness programs aimed at tackling the mass casualty effects of CBRNE weapons, as well as natural disasters.

SMi’s 7th annual CBRNE conference comes at no better time to address the importance of tackling this pressing issue. CBRNE Europe 2013 will focus upon detection, response and threat of current CBRNE on a global scale. Whilst the hazardous materials remain the same, combating the threat that these materials pose requires a concerted approach to share information and solution developments.

For those wishing to attend, you can register online at http://www.cbrne-event.com or alternatively contact the CBRNE Europe team for more information on: +44 (0) 207 827 6736 or email ctuna(at)smi-online(dot)co(dot)uk.

The SMi Group is a highly professional, independent and global event-production company that specializes in Business-to-Business Conferences, Workshops and Masterclasses, and online Communities. The SMi Group creates and delivers events in the Defence, Security, Energy, Utilities, Finance and Pharmaceutical industries. For more information, please visit http://www.smi-online.co.uk.