Enthusiasts of Celebrity Cruises will be in for a real treat in 2010. Just recently, the premium cruise line has announced the return of Bermuda sailings round-trip from Cape Liberty, New Jersey. 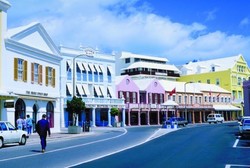 After a two-year absence, Celebrity Cruises has just announced that they will resume cruises to Bermuda round-trip from Bayonne, New Jersey (across from the Statue of Liberty) starting in 2010. Better yet, these 7-night Bermuda cruises will be on the 5-star Celebrity Summit, one of the elegant Millennium-class ships.

So, the return of Celebrity to Bermuda cruises from the New York - New Jersey area is quite a homecoming event. To spread the good news to its long-time clients (including hundreds who had already requested details about these NJ - Bermuda sailings as soon as Celebrity made the official announcement), Direct Line Cruises announced a two-week advance sale promotion featuring onboard credits up to $100 for reservations on the Celebrity Summit that are made between March 6 and March 19, 2009, in addition to free travel insurance and special introductory rates. This promotion applies to the regular 7-night Bermuda cruises on Celebrity Summit from Cape Liberty, New Jersey as well as the 7-night and 14-night Canada / New England sailings on that ship from Cape Liberty.