HEART of the BEHOLDER, the movie that Reverend Donald Wildmon's National Federation for Decency doesn't want anyone to see, is the first feature film to be completely serialized into short easy-to-watch episodes for free on Metacafe.com. 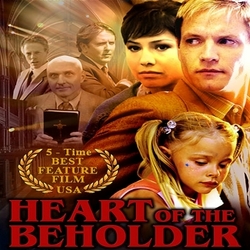 Many people claim our movie panders to Atheists, Humanists, Wiccans, Gays, Lesbians, and Liberals because it trashes Christians and people of faith. If that was true, then why did an all Bible-Belt Christian audience in Kentucky give us a standing ovation and our second of five consecutive Best Feature Film awards? Our movie is about the abuse of power - both religious and political.

HEART of the BEHOLDER has won more Best Feature Film awards on the independent film festival circuit than Pulp Fiction, Boys Don't Cry, Sling Blade, or any other movie. But distributors complain that it is too controversial for the general public.

HEART of the BEHOLDER is based a true story of religious censorship, intolerance, and political corruption.

HEART of the BEHOLDER follows a young couple chasing the American Dream by risking their life savings and opening the very first videocassette movie rental business in St. Louis. On the verge of going out of business, their luck changed when a world renowned celebrity came looking for VHS videos to rent. With lots of hard work, their Video Library store grew into the largest video chain in St. Louis and the family prospered socially and financially.

That was until Reverend Donald Wildmon and other religious conservatives lead a protest of over 25,000 Christians at Universal Studios in Hollywood over the release of Martin Scorsese's controversial film The Last Temptation of Christ.

When all of his fellow St. Louis video retailers refused to order the video version of Last Temptation in fear of religious boycotts, the Video Library owners volunteered to offer screening copies to their customers for free to test the waters. (Screening copies are videos sent out to retailers for evaluation before deciding what titles and how many copies to order).

Members of the National Federation for Decency (NFD) had targeted the Video Library stores before over movies such as Hail Mary, Taxi Driver, Agnes of God, Blazing Saddles, Animal House, The Priest, The Tin Drum and also Mr. Mom because of its non-traditional family values story. The leader of the NFD, Vesta Ward, even demanded the removal of the movie Splash claiming that the movie promoted bestiality (sex with animals) because Tom Hanks makes love to a mermaid.

The Video Library stores refused to remove Last Temptation which brought constant harsassment and intimidation to the employees and family. Obscenity charges were filed and after winning two separate trials, the family was forced into business and personal bankruptcy because of the negative publicity that surrounded their First Amendment battle. In a strange twist of fate, the family learned that the Prosecutor had been blackmailed into ruining them because of his involvement with prostitutes. With the help of a news reporter, the family got something the powerless seldom do: they got revenge!

Beholder Productions' Executive Producer Darlene Lieblich, a veteran network television executive and former Daytime Emmy chairman, says "Many people claim our movie panders to Atheists, Humanists, Wiccans, Gays, Lesbians, and Liberals because it trashes Christians and people of faith. If that was true, then why did an all Bible-Belt Christian audience in Kentucky give us a standing ovation and our second of five consecutive Best Feature Film awards? Our movie is about the abuse of power - both religious and political."

The HEART of the BEHOLDER Web Theater is hosted at Metacafe.com in four sections. The Behind-the-Scenes section has news footage and background information, the Movie section has the film serialized into easy-to-watch episodes, the Commentary section has the movie with Producers Commentary, and the Misc. section has other production videos. There is no cost, registration, or login required to view the videos.

With more than 27 million unique viewers each month Metacafe® is the world's largest independent online video entertainment site (comScore Media Metrix, August 2007). They specialize in short-form original content - from new, emerging talents and established Hollywood heavyweights alike. Metacafe delivers an exceptional entertainment experience by engaging and empowering their audience every step of the way. Their VideoRank™ technology helps expose the most entertaining content, and their Producer Rewards® program rewards video creators for their best work - all as determined by viewer response. The privately held company is headquartered in Palo Alto, Calif., and has offices in Tel Aviv and New York City.

HEART of the BEHOLDER Trailer