Cheerleading Blog, supported in part by cheerleading apparel company Chassé, revealed the time of year most common for cheerleading fundraising, based on votes from their readers. 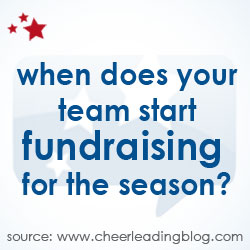 Whether your squad travels the nation for competitions or only participates in local events, every squad relies on fundraising.

According to Cheerleading Blog’s most recent poll, a majority of cheerleaders say that their squad doesn’t just fundraise once a year; they fundraise year-round.

The survey, which was conducted by Cheerleading Blog, asked readers when their team starts fundraising for the season. The option “Start? We never stop!” accounted for an overwhelming 48% of votes. Out of the other three options, the second most popular time for fundraising, with 25% of the votes, is summer.

“It is incredible to see that nearly half of voters fundraise all year round. Many cheer squads get involved with the community and fundraising is just one of the many ways,” said Jessica Rzeszut, Chassé marketing manager.

Around the same the poll was posted, Cheerleading Blog published an article on the financial costs of being a cheerleader. Since many schools lack funding for cheerleading programs, squad fees are steep. Fundraising plays a big roll in covering many of the costs required by cheer programs, from uniforms to travel fees.

The announcement of the poll results precedes Cheerleading Blog’s series on fundraising tips. Every Wednesday during the month of March, a new article will focus on an aspect of fundraising, from teaming up with local businesses to utilizing social media.

“Fundraising is not only a great way for cheerleading squads to get involved with the community, but it’s also an efficient way to reduce costs. Whether your squad travels the nation for competitions or only participates in local events, every squad relies on fundraising,” said Melissa Darcey, Cheerleading Blog contributing editor.

The poll, which was conducted this past month, was posted on the home page of the blog as well in a dedicated article. The full results of the poll can be viewed at http://www.cheerleadingblog.com.

This is the third poll of 2013. A new poll is posted each month on the blog and the results are revealed the following month.

Cheerleading Blog Releases The Results of Their First Online Cheer PollCheerleading Blog, supported in part by cheerleading apparel company Chassé, announces the top goal of cheerleaders for 2013, based on votes from their readers.