In honor of "Concierge Day in Chicago" on January 27, 2011, Best Western River North Hotel is offering guests a chance to win a day with their well loved concierge Wallace Pope. 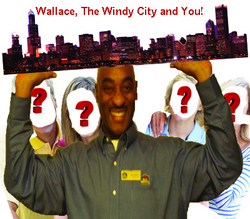 "No one has as much passion, dedication and energy in trying to bring the best of the city to our guests." Stated hotel general manager Heidi Bitar of employee Wallace Pop.

Mayor Daley has officially proclaimed January 27, 2011 the first ever "Concierge Day in Chicago." It's an opportunity to recognize and pay tribute to the men and women of Chicago who know the city best and want to share it with others.

In honor of "Concierge Day in Chicago", Best Western River North Hotel is showcasing their concierge, Wallace Pope and his talents with a contest called Wallace the Windy City and You! One lucky winner and three friends or family members will spend a day with Wallace as he reveals some of his favorite spots in the city. The day with Wallace will also include a one night stay in deluxe accommodations at the downtown Chicago hotel.

To enter visit and "Like" the hotel facebook page, facebook.com/chicagobestwestern. Then post your favorite tip for visiting Chicago. The winning selection will be announced on January 27, 2011 "Concirege Day in Chicago."