Washington State officials sanctioned the month-long December posting of an anti-Christian placard next to a Christian Nativity scene at the state Capitol, in order to provide "equal time" to an Atheist organization. State resident, Steve Sanborn, says an empty stable would better reflect the Atheist position rather than a display which attacks Christianity. 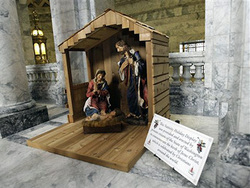 Will the state now allow me to offer my viewpoint on a placard that says Atheism is a form of insanity?

A Washington State Resident is responding publicly to a state sanctioned atheist attack on the Christmas holiday.

Steve Sanborn of Mead, Washington, this week sent a formal email to the Washington State Attorney General's office with hopes he might persuade state officials to understand that an atheistic attack on religion is not equal to an artful depiction of historical religious beliefs.

The state this week authorized a placard to be placed in the state Capitol by the Freedom From Religion Foundation (FFRF) of Madison, Wisconsin. The placard is placed next to an authorized Christian Nativity scene. Several Christian organizations are also filing complaints to the state.

Sanborn says the offensive placard is not a statement of belief but rather an attack on Christ-centered holy days and Christianity itself.

The placard reads, in part, "At this season of the Winter Solstice may reason prevail. There are no gods, no devils, no angels, no heaven or hell. There is only our natural world. Religion is but myth and superstition that hardens hearts and enslaves minds."

"Merry Christmas to you too," Sanborn said. "I'm a Catholic and the placard posted by the Freedom From Religion Foundation essentially states that I am therefore cruel and stupid - and the state has sanctioned this?

"Even Ebenezer Scrooge opted to leave Christmas alone. Why can't atheists be as generous as Scrooge at Christmas and leave it alone?" Sanborn asked.

The Nativity scene and Atheist placard were installed alongside each other in a hallway between the state Senate and House chambers, separated by a large bust of the state's namesake, George Washington. These and other displays were granted permits from state groundskeepers to be placed in the Capitol's grand marble hallways.

Sanborn said he does not recall FFRF ever making a public foray when Muslim or Jewish holidays are in season.

"We live in a predominantly Christian nation, not an atheist one. If it is equal time these people want, then perhaps they ought to erect their own stable with no one in it," Sanborn said. "This would actually reflect what they believe rather than attack those who believe otherwise."

FFRF co-president, Dan Barker, was quoted in recent news as saying it was important for atheists to offer their viewpoint alongside the overtly religious Nativity scene.

"Our members want equal time. Not to muscle, not to coerce, but just to have a place at the table," said Barker.

"For the state to assert that such a placard is somehow equal in the world of ideas merely shows its inability to be logical," Sanborn stated. "Will the state now allow me to offer my viewpoint on a placard that says Atheism is a form of insanity?"

As Bill O'Reilly did earlier this week, Sanborn says he encourages other Christians to contact Washington State Governor, Christine Gregoire, at 360-902-4111 to respectfully tell her how they feel about the offensive placard.