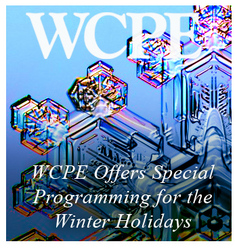 WCPE is pleased to offer unique programs of holiday music.

"Lullabies and Carols for Christmas" is a program of beautiful and relaxing songs for the season presented by Rob Kennedy, host of WCPE's Great Sacred Music every Sunday morning. Rob has chosen a mix of favorite songs with some added surprises to make for a delightful hour of music.

Bob Chapman, host of WCPE's weekly Opera House, is your guide on Christmas Eve for three hours of "The Great Music of Christmas" sung by the stars of the opera stage.

Other holiday features include a Christmas edition of WCPE's Monday Night at the Symphony, featuring seasonal favorites performed by American orchestras. In addition, we'll air two syndicated specials: "An Elizabethan Christmas with the Rose Ensemble"; and "Light of All Creation, Scatter the Darkness", featuring performances from the annual Christmas Festival at St. Olaf College in Northfield, Minnesota. All times listed are Eastern Standard.

Fri Dec. 17
1pm "Light of All Creation, Scatter the Darkness"
6pm "Lullabies and Carols for Christmas"

Sun Dec. 19
3pm "An Elizabethan Christmas with the Rose Ensemble"

Mon Dec. 20
3am "Lullabies and Carols for Christmas"
8pm Monday Night at the Symphony, holiday edition

Tue Dec. 21
7pm "Light of All Creation, Scatter the Darkness"

Wed Dec. 22
8pm "An Elizabethan Christmas with the Rose Ensemble"

Thu Dec. 23
3am "Light of All Creation, Scatter the Darkness"
1pm "Lullabies and Carols for Christmas"

New Year’s Eve will ring out the old and in the new with favorite waltzes, marches and other classics by Viennese composers Josef Lanner, Emil Walteufel and the Strauss Family, 10 p.m. to midnight. The celebration continues New Year’s Day with Beethoven’s 9th Symphony at 4 p.m.

The Great Classical Music, 24 Hours A Day offered by WCPE transcends belief systems, being crafted by artists from all traditions and listened to by a global audience reflective of the world’s diversity. Found throughout WCPE’s programming are the traditions of people from all walks of life.

WCPE’s live broadcast of Great Classical Music, 24 Hours A Day can be accessed around the globe in several ways; on-line streaming in multiple formats, including IPv6, local cable television systems and traditional radio broadcasting. A complete list of the ways WCPE is available with instructions for cable and satellite reception can be found at theclassicalstation.org/listen.shtml. In central North Carolina and southern Virginia, WCPE is found on the radio at 89.7 FM.

About WCPE:
With a 30 plus year history, WCPE is a non-commercial, 100 percent listener-supported, independent station dedicated to excellence in Great Classical Music, 24 Hours A Day. Community-minded business underwriters and foundations are among the 150,000 listeners in the North Carolina broadcast area. General Manager Deborah S. Proctor’s leadership has enabled the WCPE community to include national and worldwide listeners. Other radio stations and cable television systems can rebroadcast Great Classical Music, 24 Hours A Day. WCPE is one of the first public broadcasters to stream on the Internet. WCPE is heard worldwide on the Internet in multiple formats, including the next generation IPv6. Because WCPE receives no tax-derived support, the station conducts two on-air fundraising campaigns and two major mail-out campaigns per year to raise needed operating funds. Quarter Notes, the WCPE Program Guide, is published four times a year as a means to enhance appreciation and understanding of classical music. It is distributed to station supporters and is also available online at TheClassicalStation.org/guide. For more information, visit TheClassicalStation.Org or call 1-800-556-5178.