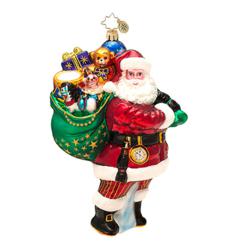 The 2013 Radko Limited Edition Christmas ornaments are a wonderful mix of traditional holiday favorites including an ornate and festive Snowman (Radko Winter Wonderland Man), a jolly Santa Claus with an overflowing sack of presents (Radko Wrapped Up, Ready to Go), a nutcracker with a delightful dream of dancing ballerinas (Radko Midwinter’s Night Dream), a cheerful Santa riding a beautiful white rocking horse (Radko Winter Rider), and a beautiful ivory colored atrium with a frosted Christmas tree inside (Radko Crystal Clear), all ready to adorn your Christmas tree this holiday season. All Christopher Radko Limited Edition 2013 ornaments are limited in production and numbered on the ornament’s tag. Christopher Radko Limited Editions represent some of the anticipated ornament introductions and collectible Radko ornaments year after year.

The 2013 Christopher Radko Designer’s Choice ornament For All the Girls and Boys is truly spectacular. For All the Girls and Boys captures a smiling and cheerful Santa setting off to spread Christmas joy and holiday cheer all around the world. This European handcrafted glass collectible ornament was jointly designed by veteran Radko artists Jospeh Walden and Mario Taré, and sparkles with holiday hope and magic. Each year the Christopher Radko Designer’s Choice ornament is one of the most sought after ornaments in the Radko collections and is usually sold out by retailers.

Crystal Clear is one of Christopher Radko's 2013 Limited Edition Ornaments