Recording Artist, "Chris Young The Rapper" will be releasing his final mixtape installment: "Value Pack 2" before the debut of his album on Cisco Adler's Bananabeat Records. 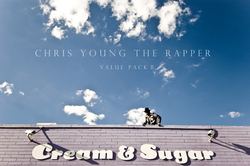 "The creme is just pure classic hip-hop & the sugar is everything else from Electronica, to dubstep with samples of "The Little Mermaid" and we even put a song from my debut album in the concoction. You see, this isn't just my year, this is my decade."

This single is the follow-up to his flight facilities remix entitled, "The Crave" which appeared just a couple weeks after the anticipated release of his music video "Stop" with director Carlos Charles Perez.

When asked about the new sound of Value Pack 2, Chris Young remarked, "The creme is just pure classic hip-hop, leaving right off the 1991 time machine and leading us to the sugar. The sugar is electronica, the sugar is dubstep samples of "The Little Mermaid" and we even put a song from my debut album in the concoction. This isn't my year, this is my decade."

Chris Young The Rapper is a performer, producer, and songwriter born on July 30th, 1989 in Norfolk,VA and by the age of 4 he moved to San Diego, CA where he was raised. Young’s love for music truly took off in a Camden, NJ basement during the winter of 2001. While his DJ uncle spun tracks by the likes of Run DMC, LL Cool J, Jay Z, and T.I., Young tried his hand at freestyle rapping for the first time. The rhymes flowed naturally and the rest is history.

After a semester at the University of Arizona as a Philosophy major, Young decided instead to pursue his musical calling. He caught a ride to Los Angeles during the summer of 2008 with the vision of launching his hip hop career. With no money or a place to stay, a determined Young began booking his own shows, making his presence felt almost immediately. In September 2008, Young opened for Shwayze and Cisco Adler at the Rialto Theatre, in Tucson, AZ. Adler was blown away by Young’s impressive rapping skills and took him on a cross country tour with Shwayze, Tabi Bonney, Mickey Avalon, and more.

He released his project, Mood Swing EP, as a free download in April 2009 to critical acclaim. In August of that same year, Young signed to Cisco Adler’s Bananabeat Records, becoming the label’s premier artist. In January 2010, he released his mixtape 619 with Adler producing the opening single, “Stadium Rap.” Repping San Diego’s area code, he then released his series, Valuepack, contributed four songs to music man Adler’s epic 23-track mixtape, SUPERCALIFORNIALIPSTICKSEXYMAGICDOPESHIT, collaborating with Cobra Starship in the process. In October 2010, he released his 1991 EP with features from westcoast legend Del The Funky Homosapien and WAX, full of clever lyrics and killer Cisco Adler beats which showed his love for the culture he had began to make an impact in.

Not one to take a day off, Chris Young The Rapper appears in 2011, with new songs like "PostinWestcoastin" and "The Crave" building anticipation for his february release, Value Pack 2: Creme and Sugar. This is definitely someone worth watching.

Information and interviews with Chris Young available upon request.