British teen launches her life from the dance floor -- part of a series of “Meet a Scientologist” videos in which Scientologists talk about the application of Scientology in their lives. 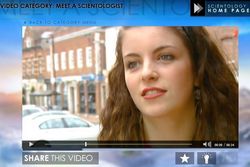 Scientology helps me in dancing and singing because it gives me a lot of confidence and keeps stress away.

Sophii Kennard, 22, started dancing when she was three. Beginning in ballet, she soon added tap, modern and contemporary dance.

In her “Meet a Scientologist” video, Kennard explains that the dance floor was her launching pad for life.

"I just love dancing," the Sussex teenager says. "When you’re stressed you can go into a studio with loads of music and you are totally in the zone and it’s so aesthetic."

Life was not always so straightforward and enjoyable for Kennard. In fact, at age 16 it was anything but easy: difficulties in school, trouble with boyfriends -- the typical uncertainties teenagers face.

That was when Kennard learned about Scientology.

"My mum came across a book called 'What Is Scientology?'” says Kennard. Her mother started reading it, found it was just right for her, and introduced Sophii and the whole family to the subject.

"It really clicked, how much Scientology could actually help me in life,” says Kennard. “It just totally cleared up the problems."

Scientology also provided practical assistance when it came to her career aspirations. "Scientology helps me in dancing and singing because it gives me a lot of confidence and keeps stress away. Being on stage or with a whole group of people in a competition, there’s a lot of stress, and that just doesn't affect me anymore."

“I have three things that I really love in life,” says Kennard. “Dancing, singing and helping people.”

She says Scientology has helped in these and every area of her life and has contributed to her overall well-being. "It just enables you to set your sights high, high, high and reach your goals and reach your targets and be confident as well."

Watch the video on Scientology.org.