Scientology: How We Help—Opening Opportunity to Haitian Children

Released in March 2013 by the Church of Scientology, the brochure Scientology: How We Help—Applied Scholastics: Achieving Literacy and Education describes Applied Scholastics at work to provide quality education to underserved children. This is the story of Susi Tschupp and 150 children in Haiti. 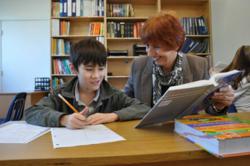 I help them with an educational path that furthers their goals and purposes and I use Study Tech to open the door and give them the tools to be able to learn anything.

Today, in Cap Haitien, Haiti, 150 children attend classes in a new schoolhouse, thanks to educator Susi Tschupp of Clearwater, Florida.

Four years ago, several friends of Tschupp returned from a trip to Haiti and told her of a Baptist minister, Pierre Erasmin, and his school for orphans. While impressed with the minister’s compassion for the children, they were dismayed by the state of the school. A lifelong educator, Tschupp decided to help.

“I flew there with a pilot in a small plane,” says Tschupp. “The school was in a sorry state, just a few benches outside—no books, no materials. They even had to share pencils. There was no electricity, fresh water or medical care. The only hope these children have is to learn to read and write as a basis for a productive life, but their teachers were untrained.”

While there, Tschupp presented seminars on Study Technology—the educational breakthrough researched and developed by American author, humanitarian and Scientology Founder L. Ron Hubbard. Isolating the precise causes for the success or failure of any activity or study, Mr. Hubbard developed this actual technology of learning with which to master any subject.

Tschupp’s determination to establish a proper school for the children started with raising funds to bring two teachers to Clearwater to learn basic Study Technology.

Tschupp works at Clearwater Academy, a private school utilizing Study Technology, where teachers and administrators eagerly helped. They held a fundraiser for school materials and desks, Tschupp sent emails to friends asking them for support. “I helped people with various projects and rather than have them pay me, I had them donate money for the school, so I could pay for the roof of their schoolhouse,” says Tschupp.

There is more to do, and Tschupp is carrying on to make sure it is done, but the children now have a schoolhouse, trained teachers and a chance.

Tschupp’s commitment to education began with her first teaching position—in a public school and a private Jewish school in her native Switzerland. It was in 1974, when she became a Scientologist, that she first heard of Study Technology.

“In the schools where I taught, I saw students were struggling and how important it was for their future for them to do well in school. There was no solution—once they had fallen behind, they had no other chance,” she says.

To give them that chance, in 1976 at a public school in Zurich she took on a group of high school students who had failed various subjects.

Tschupp received authorization to teach the students how to learn by introducing them to Study Tech as the first course of the semester. “They were tested by a school psychologist before and after and he confirmed that after that course they had an average increase in IQ of 5 points,” she says.

Now a resident of Clearwater, Florida, she has taught at Clearwater Academy since 2001. Applied Scholastics International is a secular nonprofit public benefit corporation that addresses head-on the problem of illiteracy by making broadly available L. Ron Hubbard’s discoveries in the field of education and literacy.

“When we take on new students, we test them to see how to place them. I had a student who tested very poorly when she first came to us despite having consistently gotten A's and B's in public school. I interviewed the girl again, suspecting she was just nervous or upset over being tested. She said the reason for her good grades in school is she was very good at guessing on multiple- choice tests. She was very happy to finally get her confusions cleared up and learn what she had missed. Now she is just about to graduate from high school— a shining, smart, honest girl who has taken full advantage of her education.”

Tschupp appreciates being part of the Applied Scholastics network, that provides help, support and materials to train teachers and educators.

“I see each student as an individual who has dreams and hopes. Often, students do not yet know what do with their lives,” she says. “I help them with an educational path that furthers their goals and purposes and I use Study Tech to open the door and give them the tools to be able to learn anything.”