Church of Scientology Commended by Hawaii House of Representatives

A resolution passed by the Hawaii House of Representatives March 14 commended the Church of Scientology “for its humanitarian work and community service around the globe.” 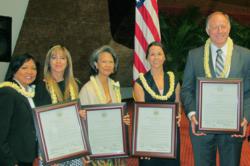 The commendations, introduced by Hawaii Representative Rida Cabanilla, acknowledged the work of Scientologists who 'volunteer more than 27 million hours in their communities through participation in humanitarian programs.'

The Hawaii House of Representatives awarded Certificates of Commendation to the Church of Scientology and Hawaiian Scientologists March 14, 2013, in recognition of the dedication of individual members to helping in the community and the Church’s work to “support human rights and social betterment programs around the globe.”

The commendations, introduced by Hawaii Representative Rida Cabanilla, acknowledged the work of Scientologists who “volunteer more than 27 million hours in their communities through participation in humanitarian programs.” The commendation specifically mentions “programs devoted to the preservation and expansion of human rights;” “the Church of Scientology drug-awareness program,” described as “one of the largest drug education initiatives in the world;” its drug rehabilitation work which implements technology developed “by its founder L. Ron Hubbard, to assist addicts with recovery without the use of other substitute drugs or medications;” Scientologists distribution of The Way to Happiness, which “has been shown to reduce crime and bring calm and happiness to areas previously in turmoil” and “the Church of Scientology’s Volunteer Ministers program [which] has dispatched its volunteers around the world to provide humanitarian aid and assistance in communities devastated by natural disaster.”

Individual Hawaiian Scientologists commended were Amanda Barefoot for her work with young people, increasing their levels of literacy and their ability to apply what they learn so they can live up to their own potential; Sakura Thompson, whose work in the Church-supported Truth About Drugs education and prevention program is helping Hawaiian youth live drug-free lives; and Hilu Hanson, who educates youth on the Universal Declaration of Human Rights to raise awareness of fundamental rights and increase tolerance and respect for diversity.

Rev. Bob Adams accepted the Certificate of Commendation on behalf of the Church of Scientology International.

In the House Chambers, Representative Cabanilla introduced the resolution, which the House accepted unanimously, and delivered a speech acknowledging the humanitarian contributions of the Church of Scientology.