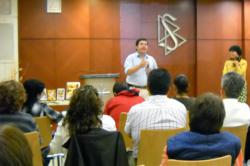 A promise is a promise: Time for action to end violence against women.

Director of Community Programs Pamela Loman introduced the United Nations Women’s Day theme for 2013 which is “A promise is a promise: Time for action to end violence against women,” and spoke of human rights issues affecting women.

Statistics published by the United Nations Entity for Gender Equality and the Empowerment of Women paint a grim picture of the state of women’s rights in 2013:

As many as 76 percent of women in certain countries are targeted with sexual or physical abuse at some point in their lives.

In Guatemala, an average of two women are murdered each day. In the State of Chihuahua, Mexico, 66 percent of the murders of women are committed by husbands, boyfriends or other family members.

Worldwide, up to 50 percent of sexual assaults are committed against females under 16.

Women and girls comprise 80 percent of the estimated 800,000 people trafficked annually, with the majority (79 percent) trafficked for sexual exploitation.

Monica Cruz, a senior professor at the Autonomous National University of Mexico and specializing in women’s rights, spoke of actions women can take to protect themselves against acts of violence.

A panel of human rights and community leaders addressed coordinated effort’s that can bring about rapid and constructive change in women’s rights.

Those attending were presented with copies of Scientology: How We Help—United for Human Rights, Making Human Rights a Global Reality, a brochure published by the Church of Scientology International to meet requests for more information about the human rights education and awareness initiative the Church supports.

The National Scientology Organization for Mexico, located at Balderas No. 27, Centro Histórico, Del. Cuauhtémoc, México, D.F., serves as a home for the entire community and a meeting ground of cooperative effort for the benefit of citizens of all denominations.

Scientology Founder L. Ron Hubbard wrote, “Human rights must be made a fact, not an idealistic dream,” and the Scientology religion is based on the principles of human rights. The Code of a Scientologist calls on all members of the religion to dedicate themselves “to support true humanitarian endeavors in the fields of human rights.”

The National Scientology Organization for Mexico is designed to serve as a meeting ground of cooperative effort for the benefit of citizens of all denominations.