Scientology Volunteers Address the Cause of Bullying in Japan

Volunteers from the Church of Scientology and Scientology Missions of Japan address the underlying issues that made last month’s passage of an anti-bullying ordinance in the city of Otsu necessary. 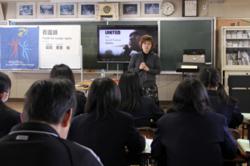 Volunteers from the Church of Scientology Tokyo and Scientology Missions in Japan are countering bullying by providing human rights education in Japanese schools.

Human rights must be made a fact, not an idealistic dream.

Volunteers from the Church of Scientology of Tokyo and Scientology Missions in Japan are committed to reversing the underlying attitudes that have made bullying a threat to the children of their country.

Last month, the city of Otsu, Siga Prefecture, passed an anti-bullying bill a month after admitting in court that bullying led to a 13-year-old boy’s suicide.

In November 2012, a survey conducted by the Ministry of Education, Culture, Sports, Science and Technology (MEXT) revealed Japanese schools reported more than 140,000 cases of bullying from April to September 2012, with 278 of these incidents involving violence or a threat to a student’s life.

Bullying infringes against or violates the human rights described in the Universal Declaration of Human Rights (UDHR) such as the right to life, education, personal ownership, freedom of thought or expression and freedom from unfair detainment or torture.

The Otsu ordinance urges that youth be educated to understand what bullying is. By using booklets and multimedia resources of Youth for Human Rights International, Scientology volunteers have been in the forefront of this kind of education since 2006.

One of the resources these volunteers use speaks directly to this issue. It is the award-winning hip-hop music video UNITED, in which children rally behind a young boy confronted by bullying. Other resources include the booklet What are Human Rights? which describes each of the 30 articles of the UDHR in terms children and teens can understand, and a series of 30 public service announcements which bring these concepts to life. The documentary The Story of Human Rights chronicles the historical development that led to the Universal Declaration of Human Rights.

Scientologists on five continents engage in collaborative efforts with government agencies and nongovernmental organizations to bring about broad-scale awareness and implementation of the 1948 United Nations Universal Declaration of Human Rights, the world’s premier human rights document.

The Church of Scientology published Scientology: How We Help—United for Human Rights, Making Human Rights a Global Reality to meet requests for more information about the human rights education and awareness initiative the Church supports. To learn more, visit http://www.Scientology.org/humanrights.

Scientology Founder L. Ron Hubbard wrote, “Human rights must be made a fact, not an idealistic dream,” and the Scientology religion is based on the principles of human rights. The Code of a Scientologist calls on all members of the religion to dedicate themselves “to support true humanitarian endeavors in the fields of human rights.”

Children in a Japanese junior high school study What are Human Rights?, a booklet that presents in simple terms the 30 articles of the Universal Declaration of Human Rights.

Children in a Japanese junior high school study What are Human Rights?, a booklet that presents in simple terms the 30 articles of the Universal Declaration of Human Rights.