In commemoration of United Nations International Day for the Elimination of Racial Discrimination, volunteers from the new Church of Scientology of Cambridge, Ontario, promoted human rights at Kitchener City Hall. 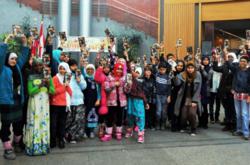 Volunteers from the Church of Scientology of Cambridge joined other community groups from the tri-city area March 21 in a celebration of diversity at Kitchener City Hall.

Elementary and middle school students from India, Palestine, Pakistan and Afghanistan now living in the Kitchener area were the special guests of City Hall for a presentation held in honor of United Nations International Day for the Elimination of Racial Discrimination.

Volunteers from the Church of Scientology of Cambridge set up an information booth, briefed the schoolchildren on the Youth for Human Rights educational program and played UNITED, a hip-hop music video about a young boy who holds his own against a group of bullies by gathering support from youth from around the world.

March 21 was set aside by the United Nations General Assembly in 1966 as International Day for the Elimination of Racial Discrimination in commemoration of the Sharpeville Massacre. It was on this day in 1960 that South African police opened fire on an unarmed protest against the country’s Apartheid policies, killing 69 and seriously injuring 180.

Youth for Human Rights International is a nondenominational nonprofit organization. Its purpose is to teach youth about human rights, specifically the United Nations Universal Declaration of Human Rights, and inspire them to become advocates for tolerance and peace.

Scientologists on five continents engage in collaborative efforts with government agencies and nongovernmental organizations to bring about broad-scale awareness and implementation of the 1948 United Nations Universal Declaration of Human Rights, the world’s premier human rights document.

The Church of Scientology published Scientology: How We Help—United for Human Rights, Making Human Rights a Global Reality, to meet requests for more information about the human rights education and awareness initiative the Church supports. To learn more, visit http://www.Scientology.org/humanrights.

Scientology Founder L. Ron Hubbard wrote, “Human rights must be made a fact,
not an idealistic dream,” and the Scientology religion is based on the principles of human rights. The Code of a Scientologist calls on all members of the religion to dedicate themselves “to support true humanitarian endeavors in the fields of human rights.”

Elementary and middle school students from the Kitchener area signed a petition in support of mandatory human rights education.