A Scientology publication released November 13, 2012 describes grass-roots action against cannabis in KwaZulu-Natal, South Africa, where alarming levels of student use of the drug prompted Scientologists to take action. 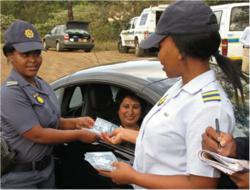 KwaZulu-Natal police have now incorporated the Truth About Drugs materials into their work in the community.

An account of the work of volunteers in the province of KwaZulu-Natal, South Africa, in Scientology: How We Help—The Truth About Drugs, released November 6, demonstrates the vital necessity of coordinated actions to protect school-age children and teens from the dangers of drugs. In that province, a primary producer and exporter of a form of cannabis called “dagga,” an estimated 40 percent of students were smoking the drug.

The situation prompted authorities to stage raids on schools throughout the province with pat-down searches of young students resulting in police routinely seizing stashes of drugs.

Truth About Drugs campaign volunteers conducted drug prevention lectures in many schools, one classroom at a time, but the campaign coordinator calculated at that rate it would require years to make a significant difference. To bring about the rapid change needed, he reached out to local educators, presenting a three-hour seminar to teachers, school administrators and volunteers to train them in the use of the program.

The first team not only learned to implement the curriculum, they also undertook the training of other teachers to do the same. Among the first to export the program was the principal of a primary school who trained his own teachers on the Truth About Drugs curriculum and made the training available to teachers from neighboring schools.

With word of the program spreading from classroom to classroom and school to school, the Truth About Drugs initiative took on a life of its own, with 370 teachers making the program available to some 30,000 students in the region. It was even adopted by a former drug dealer who heard of the program, completed the training, and has now given drug awareness lessons to 1,000 Zulu-speaking teenagers at a secondary school.

Learning of the popularity of the initiative, the provincial commissioner of the Department of Police Training of KwaZulu-Natal decided to adopt the Truth About Drugs and establish it as a core component of the police training curriculum.

To read a copy of Scientology: How We Help—the Truth About Drugs, Creating a Drug-Free World, or to learn more about the Church of Scientology drug education program, visit the Scientology website.

About The Church of Scientology

The Church of Scientology supports Truth About Drugs, one of the world’s largest nongovernmental drug education and prevention campaigns. It has been conclusively proven that when young people are provided with the truth about drugs—factual information on what drugs are and what they do—usage rates drop commensurately.

Drug education using the Truth About Drugs curriculum is now common in schools throughout ZwaZulu-Natal.