75 percent of Japanese schoolchildren oppose use or possession of quasi-legal drugs. 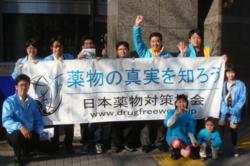 Volunteers from the Church of Scientology of Tokyo hold street events to inform their communities of the truth about drugs.

A poll conducted and released February 19 by Japanese news agency Kyodo Tsushin reported more than 75 percent of Japanese junior high school and high school students feel possession or use of “dappo habu” (quasi-legal drugs) is bad, while the remaining students think there is nothing wrong with possession or possession and use of these substances as long as they are not banned.

Quasi-legal drugs are substances that have not been deemed illegal but are chemically similar to banned narcotics.

The Japan Times reported that Nao Mazaki, coordinator of the Truth About Drugs program for Japan said the survey showed that youth lack awareness of the potential harm quasi-legal drugs can cause—a factor she states demonstrates the urgent need for the government to step up programs to disseminate information about these substances.

Volunteers from the Church of Scientology of Tokyo are raising awareness about synthetic drugs through meetings with law enforcement and government agencies and bringing the subject to the attention of the media. The volunteers reach youth through drug education lectures in schools and by holding street events where they distribute booklets presenting the facts about street drugs and prescription drug abuse.

The Church of Scientology has published a brochure, Scientology: How We Help—The Truth About Drugs, Creating a Drug-Free World, to meet requests for more information about the drug education and prevention initiative it supports. To learn more or to read a copy of the brochure, visit http://www.Scientology.org/antidrug.

Volunteers from the Church of Scientology of Tokyo distribute booklets with factual information about drugs.

Volunteers from the Church of Scientology of Tokyo conduct drug education programs in schools to ensure youth know the truth about street drugs and prescription drug abuse.