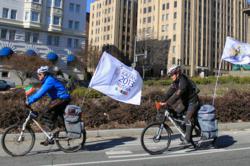 Two cyclists from Tatarstan are circling the globe by bicycle in the name of bringing about a drug-free world.

The cyclists embarked on their journey to do their part in bringing about a drug-free world.

The Church of Scientology National Affairs Office in Washington, D.C., hosted two Russian athletes February 11 who are raising awareness of the need for drug education. The cyclists, Alen Khairullin, 26, and Pavel Grachev, 47, have already cycled for 4,660 miles and are circling the globe by bicycle.

The cyclists embarked on their journey to do their part in bringing about a drug-free world. They hold drug education and prevention events and distribute copies of the Truth About Drugs booklets throughout their journey.

Launching their project in Kazan, the capital of the Tatar Autonomous Republic (Tatarstan), on November 12, 2012, the two athletes are also promoting the 2013 Universiade, an international biannual sports event organized by FISU (the International University Sports Federation).

The trek, which commemorates the 100th anniversary of the two-year bicycle circumnavigation of the globe by Kazan-born Onisim Pankratov, is timed to complete in Kazan on July 6, 2013, just before the opening ceremony of the 27th Summer Universiade.

Their journey is funded by the President of Tatarstan and the Ministry of Youth, Sports and Tourism and they received an official send-off from the Prime Minister of Tatarstan.
Cyclists Khairullin and Grachev will preside at drug education and prevention events as they bike across America.

The Church of Scientology has published a brochure, Scientology: How We Help—The Truth About Drugs, Creating a Drug-Free World, to meet requests for more information about the drug education and prevention initiative it supports. To learn more or to read a copy of the brochure, visit http://www.Scientology.org/antidrug.

The Church of Scientology supports the Truth About Drugs, one of the world’s largest nongovernmental drug education and prevention campaigns, and Scientologists on five continents volunteer year-round to make this program broadly available. It has been conclusively proven that when young people are provided with the truth about drugs—factual information on what drugs are and what they do—usage rates drop commensurately.