The Way to Happiness is the latest in a series of professional enhancement seminars presented to members of the Sheriff’s Multi-Faith Clergy Council, intended to increase understanding and tolerance and reinforce the County’s declining crime rates. 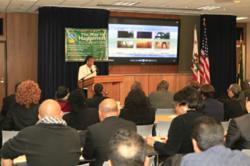 One hundred members of the Los Angeles County Sheriff’s Dept. Multi-Faith Clergy Council and other community leaders filled the meeting hall at the Sheriff’s headquarters.

One hundred members of the Los Angeles County Sheriff’s Department Multi- Faith Executive Clergy Council filled the meeting hall at Sheriff’s headquarters in Monterey Park to learn how to implement character education programs in their communities.

The Sheriff’s Multi-Faith Clergy Council, led by Bishop Edward Turner, and the Church of Scientology International co-hosted the seminar in coordination with the Los Angeles County Sheriff’s Department. Caralyn Percy, President of The Way to Happiness Foundation, located in Glendale, acted as facilitator.

This seminar is part of a series of workshops aimed at providing religious and community groups and law enforcement with practical and effective tools that address and help prevent drug abuse, violence, and reinforce the trend of reduced crime in Los Angeles County. In January 2013, the LA County Sheriff’s Department released the crime statistics for 2012 showing a “five-year continuous decrease, resulting in a 37.5 percent decrease in homicides in 2012 compared to five years ago, and the lowest number of homicides in Sheriff’s patrol areas since 1970.”

Workshop participants represented the broad religious and ethnic diversity of Los Angeles County including Christians, Scientologists, Mormons, Muslims and Jews. Also attending the seminar were community leaders, gang interventionists and six officials from a regional federal prison who want to use the program with inmates to help reduce recidivism.

The seminar was based on The Way to Happiness: A Common Sense Guide to Better Living, written by author and humanitarian L. Ron Hubbard, and based on the book’s 21 non religious, commonsense moral guidelines or precepts. The precepts enable people of any race, culture or creed to attain happier, more decent and more fulfilling lives by enhancing moral judgment and conduct and instilling commonly shared values.

The seminar took up three of the 21 precepts from The Way to Happiness: “Be Industrious,” “Love and Help Children,” and “Do Not Murder.” Attendees first watched a public service announcement illustrating each precept, read the corresponding chapter of the book aloud and watched the video segment contained in the book-on-film. Discussions were thoughtful and lively and attendees gained a new perspective on simple yet vital concepts they can use in their communities.

The Executive Multi-Faith Clergy Council consists of more than 50 religious leaders with a membership of more than 300 clergy, representing multiple religious faiths and ethnic groups serving throughout the County of Los Angeles. Their focus is to embrace the concept of Community Orienting Policing, promoting community empowerment and building public trust within the faith- based communities.