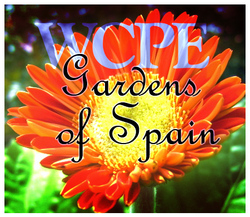 We travel from the Baroque Central gardens to the Mediterranean and Islamic gardens of Southern Spain.

WCPE’s Assistant Music Director Kenneth Bradshaw announces ‘In the Gardens of Spain’ Weekend, May 15 –16, 2010. The program will feature great composers as well as virtuoso performances.

“The passionate nation of Spain works a mysterious magic,” says Bradshaw. “WCPE focuses on ‘The Gardens of Spain’,” he continues. “We travel from the Baroque Central gardens to the Mediterranean and Islamic gardens of Southern Spain.” Bradshaw adds, “The music will be as wonderful and diverse as the Spanish gardens themselves.”

Also the Saturday Evening Request Program enables listeners to add their favorite composers and performers to the playlist.
http://theclassicalstation.org/features_request.shtml is the link to the SERP request page.

WCPE can be heard worldwide, 24/7, via the Web in multiple streaming formats, including the next generation IPv6. Visit TheClassicalsStation.org/internet.shtml to begin listening online.

About WCPE:
With a 31 plus year history, WCPE is a non-commercial, 100 percent listener-supported, independent station dedicated to excellence in Great Classical Music, 24 Hours A Day. Community-minded business underwriters and foundations are among the 150,000 listeners in the North Carolina broadcast area. General Manager Deborah S. Proctor’s leadership has enabled the WCPE community to include national and worldwide listeners. Other radio stations and cable television systems can rebroadcast Great Classical Music, 24 Hours A Day. WCPE is one of the first public broadcasters to stream on the Internet. WCPE is heard worldwide on the Internet in multiple formats, including the next generation IPv6. Because WCPE receives no tax-derived support, the station conducts two on-air fundraising campaigns and two major mail-out campaigns per year to raise needed operating funds. Quarter Notes, the WCPE Program Guide, is published four times a year as a means to enhance appreciation and understanding of classical music. It is distributed to station supporters and is also available online at TheClassicalStation.org/guide. For more information visit TheClassicalStation.Org or call 1-800-556-5178.