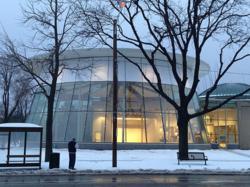 Other cities in this country and in Europe have built or restored carousels, but few are in an original home. Those communities have found carousels are a perfect multigenerational draw for both residents and visitors.

The 6,000 square foot glass pavilion that will house the iconic Euclid Beach Park Carousel is nearly complete at the Western Reserve Historical Society in Cleveland's University Circle. The pavilion joins a long list of construction projects that are currently in progress or completed in Cleveland’s University Circle area.

The $1.5 million pavilion, designed by the internationally recognized architectural firm of Richard Fleischman + Partners Architects, Inc., is part of a $2 million project that also includes the restoration of the mechanism and decorative components of the carousel that operated for nearly sixty years at Euclid Beach Park. Carousel Works in Mansfield, Ohio, has been retained to perform the necessary repairs to the platform and drive mechanism.

The project is being underwritten by the Cleveland (Euclid Beach Park) Carousel Society, which is raising the funds for the carousel restoration by creating opportunities for businesses, individuals, and philanthropies to invest in the project in a variety of ways, including the “adoption” of a horse or chariot or sponsoring the production of the original artwork that will adorn the rounding boards and center surround on the carousel. Other naming opportunities also exist throughout the pavilion.

“Other cities in this country and in Europe have built or restored carousels, but few are in an original home,” said Terry Kovel, chairperson of the Cleveland Carousel Society. “Those communities have found carousels are a perfect multigenerational draw for both residents and visitors. The Euclid Beach Park Carousel is a Cleveland icon, and has already generated significant international interest because of the preservation of many of its original pieces to fully functional use and,” Kovel added, “because it will be open to the public.”

The Cleveland Carousel Society was founded by community members who understood the profound impact that restoring an original piece of Cleveland history would have on the region. In addition, board members from Euclid Beach Park Now—a community organization formed in 1989 to honor and preserve the memory of Euclid Beach Park—supporting the Carousel Society’s mission and serve on the it’s Board. This volunteer-driven organization’s sole mission is to restore the carousel to its former glory and support Carousel Cultural Legacy partnerships.

After Euclid Beach Park closed, the carousel was moved to an amusement park in Maine until that park closed in 1996. In 1997, the horses and chariots were brought back to Cleveland and donated to WRHS after being purchased through auction by a winning bid from Cleveland Tomorrow made possible through a loan from Cleveland's Trust for Public Land. Unfortunately, the mechanism was no longer functional and the horses and panels on the machine needed major restoration. Since the donation of the horses and chariots, several venues were explored to house the carousel, but none were chosen for a variety of reasons. Ground was broken for the carousel pavilion on April 17, 2012.