We have all heard of mold problems in homes and buildings and it is often a subject for jokes and puns, but have you ever heard about mold being a problem in a car? CMMS Studio recently learned that it is no joke and the consequences of vehicular mold can be devastating. 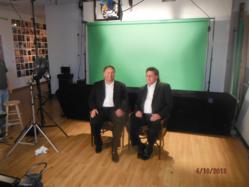 The miles were right, the price was right and it came with all the options my family and I were looking for. It also came with one more option that I did not expect

The film crew at CMMS Studio has recently learned that Vehicular mold is a growing problem in the United States. During their latest production they met with Mr. John Gainey, Owner and managing Partner of Smart Air Technologies, a company that is seeking to create awareness about vehicular mold. But how does it get there? The answer is quite simple although elusive: Hurricanes Katrina, Sandy and other flooding events that have plagued the country in the past years have left in their wake a slew of water damaged vehicles.

These natural disasters have made headlines along with never ending images of the destruction left behind, but very little has been said or reported about what happens to the damaged property, especially motor vehicles. During the production of the informational videos, The CMMS Studio Film Crew had the opportunity to meet Mr. Tim Greene, a well-known gospel performer, who was directly affected by this phenomenon.

During filming, he gave testimony of how his was life was threatened by this unseen danger. “I purchased a six month old SUV. The miles were right, the price was right and it came with all the options my family and I were looking for. It also came with one more option that I did not expect and did not learn about until one day several months later when I could not walk and almost died,” stated Mr. Greene. The unexpected option was an environmental hazard called “hidden mold growth” that was emanating from over fifteen unseen leaks around firewall screws and other loose or missing gaskets.

Mr. Gainey explained that many water damaged vehicles find their way to car lots across America through a practice called “Title Washing” where a damaged vehicle is sold at auction then is transported across state lines. The buyers, usually used car dealers, will clean up these vehicles quickly and only on the surface in order to turn a quick profit.

During the filming of this project, The CMMS Studio Film crew interviewed an auto detailer who corroborated this practice in detail. He confirmed that some dealers chose to ignore his warnings of hidden mold growth in order to save money. He asked to remain anonymous due to his business relationships.

Events like Mr. Greene’s and others prompted Mr. Gainey and his partner Mr. Randy Hardee to jump into action and create an advanced mold screening system intended just for vehicles. Their goal is to create awareness among the general public so that others do not have to suffer the consequences that nearly cost Mr. Greene his life. The use of the Smart Air Screening system will also give car dealers piece of mind that the cars they sell are mold free thus reducing their general liability.

CMMS Studio TV & Film Productions was thrilled to contribute to Smart Air’s efforts when contracted to help them create the necessary informational and training videos. These will be also used by Environmental Solutions of America (ESA) to train and certify technicians across the country to screen for vehicular mold. “This has been quite an eye opener” stated Art Barrera, Head of CMMS Studio’s TV & Film Production department. “I never saw this problem that is really right in front of us all”.

Located in Loris, South Carolina, Custom Multi-Media Solutions, Inc. was founded and incorporated with the objective of providing cutting-edge multimedia services ranging from Photography and Video to Graphic Design at affordable rates to people everywhere. CMMS Studio offers a wide variety of photographic services from Commercial Modeling to General Portraiture. We believe that every customer is unique and has specific needs. We provide personalized attention to all of our clients to help meet their personal budget. Our professionals include a video production team that films weddings, dance recitals and family events as well as producing high quality TV commercial spots, documentaries and industrial/training videos. CMMS Studio offers Graphic Design solutions for small and large business with three designers that can design anything from business logos to signs, brochures, billboards and web sites. No job is too large or too small.