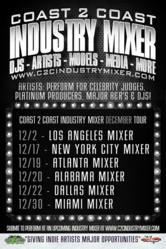 Coast 2 Coast Mixtapes announces the dates and locations for the December Music Industry Mixers. The five city tour will be the last one of the year. Attendees will include local artists, DJ’s, producers, models, and more.

DJ Bay Bay one of The Source Magazine’s Power 30 and new signee to Rick Ross’ label, Maybach Music Group, will be a guest judge at the Dallas Industry Mixer. The popular DJ has years of industry success under his belt including Hurricane Chris’ “A Bay Bay” song which was dedicated to him, hosting a show on K104 in Dallas and his company AnWhat Entertainment. Currently DJ Bay Bay is working on a solo album that will be released in the summer of 2013.

Each mixer on the tour contains a music showcase and model contest. The artist showcase and model contest will be judged by various celebrity judges. Judges in the past have included including multi-platinum and Grammy nominated artist Warren G, the #1 DJ in the South Bigga Rankin, Grammy winning producer Rockwilder, and more. Along with meeting industry professionals, each artist showcase will give away thousands of dollars in prizes including:

To find out more about the Coast 2 Coast December Music Industry Mixer Tour visit the website. Artists can submit to perform by going to http://www.c2cindustrymixer.com. Models interested in participating in the model contest, email coast2coastmodel[at]gmail[dot]com.