Friday March 8th Comanchero’s “country-funk thunder” (Relix) comes to The Loft at Tommy Doyle’s in Cambridge, MA. Comanchero is releasing one track at a time over the course of the 2013. 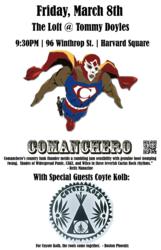 Comanchero is releasing one track at a time over the course of the 2013. Expect a full album by the end of 2013. You can check out the singles as they become available here: http://comanchero.bandcamp.com/album/twelve-for-ten

"Comanchero takes the stage and tears it up like old pros with their brand of self proclaimed 'Cactus Rock.' Drummer/ vocalist Greg Moon has the crowd under his thumb with some high octane vocals and high tempo fills. There’s a slick blend of country, pop, and rock but it’s the twangy numbers that really get people on the dance floor doing the old two-step." — Kier Byrnes, The Noise

Hailing from Boston, Comanchero reaches across regional boundaries and tastes wowing audiences with over 50 shows played including festival appearances at New England Americana Festival, Harpoon Octoberfest, and America's Cup World Series, and recently sharing the stage with Crosby, Stills & Nash, The Yardbirds, and Ronnie Earl. Since 2003 Comanchero has been one of the most exciting and consistent live acts in the Americana/jam band scene. 2012 brought Comanchero into the spotlight with a track licensed by ABC News 20/20 and the release of The Undeserved, a perfect blend of southern rock/Americana with touches of country the soaring choruses and excellent instrumentation that brought them rave reviews attracting a broad range of fans from Widespread Panic to the Allman Brothers. Never taking a moment to rest, Comanchero is releasing their 4th studio album one track at a time throughout 2013.

For more information or to schedule an interview, please contact Melissa Zeigler: melissa(at)powderfingerpromo(dot)com.