With the explosive growth of concrete stain, it's hard to imagine why anyone would place Concrete Camouflage®, for sale on the open market. Especially providing they seem to hold one of the top spots in an industry that is today one of the best flooring solutions available. You have to ask yourself, Could this be Your Lucky day? Or just another article? Let's see. 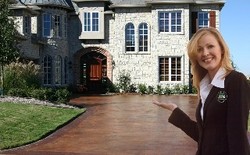 Concrete Camouflage®, in a surprising move, has been recently placed for sale on the open market, being listed with Scot Jones of The Jones Group. A prominent specialists in Business Mergers and Acquisitions, located in the Dallas, Texas area. Even more surprising is the listing price which seems to be a giveaway by today's standards at only $1.2 million. That's U.S. dollars, not even Euros.

After becoming a staple, leader, and authority within the concrete stain industry, it certainly has some scratching their heads and wondering why sell at a time when Concrete Camouflage® is seemingly ready to burst with growth? When you visit Mr. Jones website listing of the offering and company details, found at http://www.JonesCorporate.com, it says only that the Concrete Camouflage® offering for sale, is because it is not the owners core business.

Ok, that's fair enough, but it also says in not so many words, that this particular business is essentially at a point in it's growth, and it further indicates that Concrete Camouflage® has such a following, that it may very well be sitting within it's industry in a place few ever see, the beginning of greatness. If so, that would be like have being able to have gotten in, at the very take off, of companies like Coca Cola®, Kleenex®, or Sherwin Williams®.

As it turns out that is the very reason for the offering. Concrete Camouflage® has evidently grown to a point of, and reached a place in it's evolution, that with the owners other businesses and current projects of interest, they are ready to pass Concrete Camouflage® on to it's new owners, so that they can take it to it's much earned, deserved, and what looks to be an easily achievable pinnacle. Which is the reason given for Concrete Camouflage®, having been listed with Mr. Jones.

So what is Concrete Stain anyway and why would it make Concrete Camouflage® such a great investment? Concrete stain which was found primarily in commercial applications at first, soon went residential as well. Now found in many homes and businesses and gaining in popularity, concrete stain has become today's alternative to traditional flooring.

Being used both indoors and outdoors it was once available only to contractor's, yet the increased demand for concrete stain from the do it yourself population quickly brought the product into the mainstream, and Concrete Camouflage® looks to be positioned to ride the leading edge of this tremendous wave.

What fuels this demand for concrete stain? Simply said, the beauty of it, the ease of use, and likely most of all the rather significant cost savings over other types of flooring, along with the allergy friendliness, low maintenance, and much more.

Chances are you or someone you know has or will have stained concrete somewhere around your home and/or business. Chances are Concrete Camouflage is or will be the products it's stained with. Or as they would prefer to say, You've "Camouflaged Your Concrete!" TM.

So there you have it. The only question now is, who will be the next owners. Though it seems likely to be gobbled up by some big fish competitor, who knows, if you have an extra million or so it could be you. Though you may want to hurry as this rare investment opportunity doesn't seem very likely to last long.