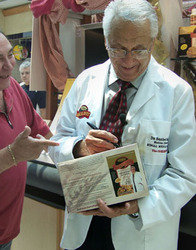 Several hundred people from Philadelphia and South Jersey turned out at Moorestown Mall on Saturday to meet Miami physician and author Sanford Siegal, D.O., M.D., the pioneering weight loss expert best known as the creator of the venerable Dr. Siegal's® COOKIE DIET™ weight loss system and hunger-controlling foods. Dr. Siegal was at the mall to launch the nation's first retail Dr. Siegal's® COOKIE DIET™ location. The doctor stayed for about two hours during which time he signed autographs and answered many questions about his 32-year old secret protein formula.

"We chose the Philadelphia area for our first retail store because we have a tremendous following here," said Dr. Siegal. "For a number of years, I allowed a franchise company to open weight loss centers in this area that used my name, my methods, and my Dr. Siegal's® COOKIE DIET™ foods. When that relationship ended in August 2006 and I stopped supplying my products to my former franchisee, we were inundated with requests from people who wanted to keep using them."

Although Dr. Siegal's COOKIE DIET™ foods became available online in May of this year at http://www.CookieDietOnline.com and toll-free at 866-464-5595, he decided to open a retail location in order to accommodate those who don't have Internet access. Many more locations are planned.

"Our Moorestown Mall kiosk is a pilot that we expect to lead to a nationwide mall program," added Dr. Siegal. "The first four days have exceeded our expectations several times over and we're already evaluating proposals from other malls in several markets."

Dr. Siegal created the Dr. Siegal's® COOKIE DIET™ in 1975 as a way to control his patients' hunger and enable them to stick to the diet that he prescribes in his South Florida medical practice, Siegal Medical Group. After much experimentation in his own kitchen, he developed a secret blend of food proteins called amino acids that provides unusual hunger control per calorie. He created a hunger-suppressing meal replacement cookie containing his formula and tested it on a handful of patients. The results were immediate and soon Dr. Siegal's COOKIE DIET™ was the only weight loss approach he used. Thirty-two years later, more than 500,000 people in North America and the UK have used Dr. Siegal's diet cookies.

In addition to the Moorestown Mall location, Dr. Siegal's® COOKIE DIET™ products are available from select drug stores, health spas, and a growing number of physicians throughout the U.S. and elsewhere. Later this year, Dr. Siegal expects to begin offering his Dr. Siegal's COOKIE DIET™-brand shakes and soup onlline and through retailers. Those products are currently available only to his own patients.

Dr. Siegal recommends that anyone who plans to use his cookies as part of any kind of weight loss diet do so under a doctor's supervision.