A husband and wife who shed 233 pounds on obesity expert Dr. Sanford Siegal's popular weight-loss regimen is celebrated in the 2011 People magazine Half Their Size cover story 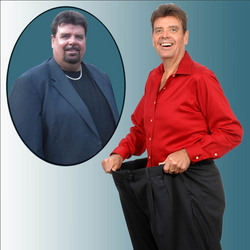 With a name as catchy as Dr. Siegal's Cookie Diet, my approach to weight-loss is sometimes dismissed by people who don't know anything about it and who've never treated an overweight patient. I've treated more than a half million overweight patients...

Josie Raper, also from the Phoenix area, appeared on the cover of People magazine in 2009 after losing 120 pounds on Dr. Siegal's Cookie Diet. The 31 year old mother has kept the weight off for two years.

Dr. Siegal's Cookie Diet entails following a reduced-calorie diet of around 1,000 to 1,200 calories per day while controlling hunger with a specially formulated cookie developed by Dr. Sanford Siegal. Moderate exercise is encouraged during the weight-loss phase of the plan. For lifetime weight maintenance, Dr. Siegal is a proponent of vigorous aerobic exercise.

Dr. Siegal's Cookie Diet, which was developed by Sanford Siegal, D.O., M.D., in 1975, has been used by more than 500,000 people. Several hundred physicians across North America have used Dr. Siegal's cookies and dietary regimen in their own practices. The brand has enjoyed worldwide fame in recent years due in part to its popularity in Hollywood. The flagship Dr. Siegal's Cookie Diet store located in Beverly Hills is frequented by celebrities and paparazzi and has been seen in national TV shows including Entertainment Tonight and E! News!.

"With a name as catchy as Dr. Siegal's Cookie Diet, my approach to weight-loss is sometimes dismissed by people who don't know anything about it and who've never treated an overweight patient," said Dr. Siegal. "I've treated more than a half million overweight patients, and Marty and Grace Moorehead, like the thousands of success stories before them, demonstrate that Dr. Siegal's Cookie Diet works, quickly and safely."

Dr. Sanford Siegal conceived the idea of a reduced-calorie diet made possible by a hunger-controlling cookie in the early 1970s while writing a book about natural food substances that are particularly effective at satisfying hunger. Recognizing that hunger is the chief enemy of weight-loss success, Dr. Siegal developed a proprietary formula for a mixture of proteins that resulted from combining certain food substances. He baked his formula into a cookie and tried it with a few patients. Dr. Siegal's Cookie Diet was an immediate success. At 82, Dr. Siegal personally prepares every batch of his secret protein formula by hand in his private bakery near his Miami medical clinic.

Dr. Siegal's weight-loss success stories have been spotlighted over the years by more than 100 major media outlets including Fox News, Good Morning America, The Today Show, The View, The New York Times, and The Wall Street Journal. Some successes, like New York Jets linebacker Kris Jenkins, have been celebrities and patients of Dr. Siegal's South Florida medical practice. Most, however, have been everyday people who overcame obesity by following Dr. Siegal's plan as his patient or under the supervision of their family doctor. Links to dozens of print and broadcast news reports about Dr. Siegal, his diet, and his books are online at http://www.CookieDiet.com/news.

Dr. Sanford Siegal Autographs His Book for a FanThe Cookie Doctor, obesity expert and author Sanford Siegal, DO, MD, has published a unique cookbook for any calorie-controlled lifestyle.